The G17 is a 9 mm handgun featured in both ArmA: Cold War Assault and ArmA 2. 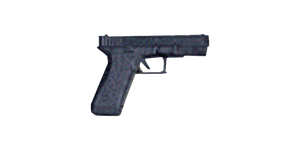 The Glock 17 is a semi-automatic pistol chambered to fire the 9×19 mm round.

It loads from 14-round magazines and can attain a fire rate of up to 600 rounds per minute, with a muzzle velocity of 375 m/s.

One of the most modern handgun designs of its time, the Glock 17 served as the standard-issue sidearm of U.S. special forces operatives during the Cold War. Compared to both the 92F issued to conventional U.S. forces and the Soviet Tokarev TT-33, the Glock 17 is superior in almost every way, from magazine capacity to accuracy, as well as being able to fit a suppressor.

Though its 9 mm round is somewhat weaker compared to the TT-33's 7.62 mm (like the 92F), it compensates for this by having large magazine size and fast rate of fire. 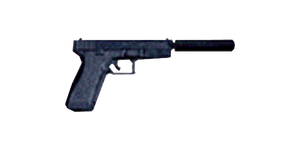 The Glock 17S is simply a modified version of the baseline Glock 17 pistol that has a sound suppressor fitted to it.

There are barely any changes to the way the Glock 17S's performs or handles. The only major difference is that the Glock 17S feeds from magazines loaded with subsonic 9 mm ammunition instead.

Both variants of the Glock 17 only support a single magazine. It requires one inventory slot to carry: 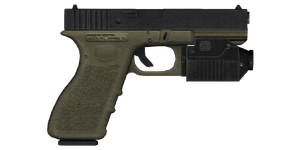 The G17 is used by several BLUFOR and INDFOR factions in ArmA 2. It was added with the release of the Operation Arrowhead expansion pack.

The G17 is a polymer framed, semi-automatic handgun chambered to fire the 9×19 mm round.

It now loads from 17-round box magazines, and can attain a fire rate of up to 600 RPM with a muzzle velocity of 360 m/s. The G17 can no longer mount optical accessories or muzzle attachments, but has an integrated tactical flashlight fitted just beneath the barrel.

Similar in role and function to the M9, the G17 has ergonomic tritium night sights that are very simple to aim with. It is generally accurate between the ranges of roughly ~ 52 and up to 70 metres. In addition, it is capable of sharing the same 15 round 9 mm magazines used by the M9.

Compared to all other sidearms aside from the PDW, it is arguably the best handgun to use due to its ideal combination of having a large magazine size, superb accuracy, and overall low recoil.

Its only real drawback is its usage of 9×19 mm ammunition. As in Cold War Assault, the G17's 9 mm round has very little stopping power and is fairly ineffective against armoured targets. While the G17 can compensate for this weakness thanks to its large magazine, it is still underpowered compared to other handguns chambered to fire more powerful cartridges (i.e. M1911s).

The G17 supports being loaded with three types of magazines. All three require one secondary weapon inventory slot apiece:

Standard 17-round magazine. Does not contain any visible tracers.

15-round magazine intended for use with the M9. Rounds fired from this magazine have a slightly higher muzzle velocity of 398 m/s.