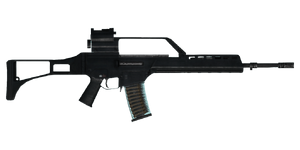 The G36A is a 5.56 mm assault rifle used by the KSK in ArmA 2. It was added with the release of the Operation Arrowhead expansion pack.

The G36A is a selective-fire assault rifle with a short-stroke piston that is chambered to fire the 5.56×45 mm NATO round. It forms the baseline model on which all other sub-variants of the G36 are based on.

It primarily loads from 30-round G36-type plastic magazines, though it can also accept STANAG magazines as well. It is able to attain a fire rate of up to 600 rounds per minute, and has a muzzle velocity of 920 m/s. It uses an integrated dual optic that combines a magnified optic (that has a zoom strength of 3.5x) with a red dot reflex sight.

Exclusively used by German special operations units deployed to Takistan, the baseline G36A is a lightweight assault rifle that is mainly built out of synthetic materials. It has an effective range of 300-400 metres and has relatively low dispersion over long ranges. The dual role optic means that it is highly versatile, and can be easily used both in close quarters and medium ranged firefights.

In terms of accuracy, it's superior to the M16A4 and is rivalled only by the XM8. Recoil-wise, it is comparable to other lightweight 5.56 mm assault rifles and is easy to control even on full auto.

The G36A's main weakness stems from its low base rate of fire, which is low even in comparison to the XM8. Furthermore it also lacks the XM8's 2-round burst fire mode, being limited to just semi- or full-auto modes. As with its predecessor in Armed Assault, the G36A also lacks a dedicated sub-variant fitted with an underbarrel grenade launcher.

Retrieved from "https://armedassault.fandom.com/wiki/G36_series/G36A_5.56_mm?oldid=50452"
Community content is available under CC-BY-SA unless otherwise noted.