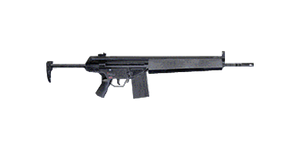 The G3A4 is a 7.62 mm battle rifle used by both the FIA and their Nogovan Partisan predecessors in ArmA: Cold War Assault.

The G3A4 is a selective-fire battle rifle that uses a roller-delayed blowback operation. It is chambered to fire the 7.62×51 mm NATO cartridge.

A common sight amongst Nogovan guerillas at the height of the Soviet occupation of Nogova, the G3A4 - like its alternate counterpart, combines decent stopping power and range in a single platform.

As is the case with the FN-FAL, the G3A4 does suffer from having quite high recoil. This is particularly noticeable when firing on full auto, where the weapon's muzzle climb essentially becomes uncontrollable.

However, when fired in short bursts of 2-3 rounds, the G3A4 can be more slightly easier to control and can even double as a marksman rifle if necessary since it has relatively good accuracy at medium ranges (though not quite capable of matching dedicated sniper rifles like the M21 since it lacks magnified optics).

It should also be noted that although it is chambered to fire the same round and is mechanically similar in a few ways, the G3A4 cannot share the same magazines with the FAL.

The G3A4 can only be loaded with one type of magazine. Each magazine requires a single free inventory slot to carry: