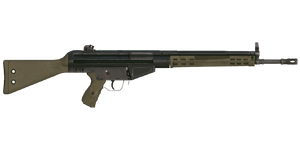 The G3A3 is a 7.62 mm battle rifle used exclusively by West German military forces in ArmA 3. It was added with the release of the Global Mobilization - Cold War Germany Creator DLC.

The G3A3 is a selective-fire battle rifle that uses a roller-delayed blowback operating system. It is chambered to fire the ubiquitous 7.62×51 mm NATO round.

It loads exclusively from 20-round box magazines designed specifically for use with the G3 series. It can achieve a fire rate of up to ~ 550 rounds per minute with a muzzle velocity of 800 m/s. The G3A3 utilises a claw mount and can be fitted with magnified riflescopes and sound suppressors.

The service rifle of West German infantry, the G3A3 is the latest iteration in the battle rifle family and features drum sights, a fixed plastic buttstock and a plastic handguard. Compared to other 7.62 mm-chambered rifles in its class, the G3A3 provides a decent combination of firepower and precision at ranges of up to 500 metres.

Thanks to being chambered in 7.62 mm, the G3A3 possesses greater stopping power than the American-made, 5.56 mm-chambered M16A1 and M16A2 rifles. Furthermore, it can be fitted with riflescopes in addition to suppressors by default, and is capable of firing muzzle-loaded rifle grenades; greatly enhancing its flexibility for any infantry role.

However, the G3A3's main drawback stems from its excessive carrying weight. Unlike its East German counterpart (or even the Polish AKM), the G3A3 is 33% heavier to wield and places a greater stamina burden on the user. Another minor issue is that the G3A3 has a lower fire rate of only ~ 550 RPM; slower than that of its contemporary counterparts by nearly fifty rounds. Lastly, the G3A3's pitiful magazine capacity of only twenty rounds greatly hampers its usefulness in close quarters.

Overall, the G3A3 isn't a terrible rifle by any measure of standard, but it is held back by these inherent weaknesses which make it generally less viable than the KM-72 or its eventual successor platform, the G36. 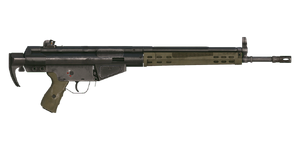 The G3A4 is an updated variant of the baseline G3A3 rifle. It is visually similar to the G3A3 but has a collapsible stock as opposed to the standard fixed one.

It possesses the same statistics as its parent weapon; the only difference stems from the ~ 14% reduced inertia penalty, which makes it less punishing to wield in close quarters.

Otherwise, there are no differences compared to the regular G3A3 rifle. 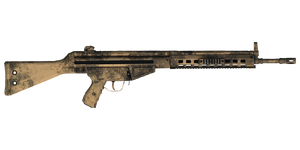 The G3A3 DMR is a modified variant of the baseline G3A3 rifle that has been outfitted with accessory rails. It remains unused by any of the primary factions.

These rails additionally support the attachment of Picatinny/Weaver-compatible flashlights, infrared laser pointers and bipods. However as there is no rail fitted onto the upper receiver, a dedicated mount is still needed for optical sights like its parent rifle.

In all other aspects, the G3A3 DMR remains completely unchanged when it comes to both performance and functionality. 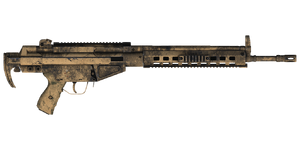 The G3A4 EBR is a modified version of the G3A4 but features accessory rails. It is not used by any of the main factions.

Like the G3A3 DMR, the G3A4 EBR's rails support being fitted with a myriad of third party accessories. In stark contrast to the G3A3 DMR however, the G3A4 EBR features a fourth rail fitted onto the receiver.

This completely eschews the need for a dedicated mount as it is now possible to fit any Picatinny/Weaver-compatible magnified/non-magnified sights and riflescopes.

It retains the same inertia reduction bonus of the G3A4 but is otherwise identical (performance/handling-wise) in every other aspect. 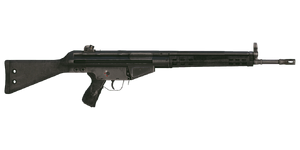 GV M/75 is the Danish military's designation for the G3A3. 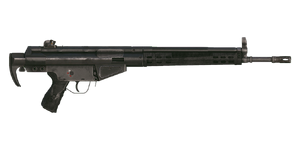 The GV M/75 Carbine is wielded by certain units within the Danish military.

Just like the baseline GV M/75 rifle, the GV M/75 Carbine is also the Danish designation for the G3A4. Except for the reduced ~ 14% inertia penalty, there are no functional differences between the two weapons.

Only a few (very minor) aesthetic differences regarding furniture colour and the finish on some of the parts exist. In every other aspect, the GV M/75 Carbine remains unaltered from the G3A4.

All variants of the G3 can be loaded with eleven types of magazines and is also (optionally) capable of launching single round rifle grenades from its muzzle.

Has slightly reduced penetration against armour but retains energy better over long ranges.

Armour piercing round intended for both ballistic vest-wearing infantry and lightly-armoured vehicles.

The grenade's explosive component has a blast radius of 6 metres and a minimum fuse distance of 15 metres. Its HEAT submunition can penetrate a depth of ~ 261.9 millimetres.

G3A3 DMR variant with rails. Note the lack of a fourth rail on the upper receiver.