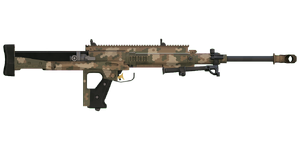 The GM6 Lynx is a 12.7 mm bullpup anti-materiel sniper rifle used by both the AAF and CSAT forces in ArmA 3.

The GM6 Lynx is a semi-automatic, long-recoil operated anti-materiel rifle that is chambered to fire the 12.7×108 mm round.

It loads from 5-round box magazines, and can attain a rate of fire of up to 150 rounds per minute with a muzzle velocity of 820 m/s. It only has a top rail for mounting optical sights and cannot be fitted with other kinds of accessories or muzzle attachments. It also has a folding bipod fixed to the centre of the barrel.

The GM6 provides the operator with the ability to provide both rapid and accurate sniper fire from ranges of 1,600 up to a maximum of 2,000 metres.

Unlike its NATO counterpart, it can also be loaded to fire Armour Piercing Discarding Sabot (APDS) ammunition which is highly effective against MRAPs and other lightly-armoured vehicles. Even heavier vehicles with exposed components such as optics or uncovered wheels can be disabled with this ammunition.

While it is significantly less accurate than the M320 LRR when it comes to long range engagements, the GM6 makes up for it by using the more hard-hitting 12.7 mm round that has better penetration against most targets.

However, it should also be noted that the GM6 is rather bulky to carry and being a sniper rifle, is naturally ill-suited for use in close quarters combat. Its magazines are also slightly heavier to carry while containing two less rounds in comparison to the M320's seven.

The GM6 can be loaded with two types of magazines. Both have identical "mass" values of 16 units:

Intended for use against lightly-armoured ground vehicles and exposed components on armoured fighting vehicles.

Mediterranean CSAT sniper-spotter team with the Arid Hexacam version of the GM6, about to learn the dangers of tunnel vision the hard way.