Georgious Akhanteros is the main antagonist of ArmA 3's The East Wind campaign.

Operating under the callsign of Phalanx, Akhanteros was the commanding officer of the Altis Armed Forces (AAF), and served as the de-facto president of the island nation of the Republic of Altis and Stratis.

In 2026, he was the leader of the anti-government splinter faction in the AAF that had carried out the bloody Kavala coup, which saw the overthrowing of the civilian leadership and the installation of his hardline, CSAT-backed and self-proclaimed junta.

Following his declaration of victory over the government Loyalists in the aftermath of the civil war (as a result of his coup), he was hailed as the legitimate representative of the nation with the signing of the Jerusalem Cease Fire in 2030.

Not long after the civil war's conclusion, Akhanteros would soon find himself embroiled in a bitter struggle against the newly formed "Freedom and Independence Army", a growing group of insurgents fighters comprised of former Loyalists and disgruntled citizens alike.

The FIA challenged his rule and attempted to overthrow the junta but were lacking in firepower compared to their predecessors. Nonetheless, the FIA proved to be resilient and refused to back down, gaining ever increasing numbers of fighters to back their cause.

The worst of the fighting would occur in September 2034. The FIA had overrun and captured the mountain village of Oreokastro. He commanded the AAF to retake Oreokastro by force - by any means necessary.

However, the insurgents proved to be much more than the army could handle. Their embarrassing failure to retake the village after two weeks of fighting frustrated Akhanteros' attempts to make an example of the insurgents.

As a last resort, Akhanteros pleaded to his CSAT paymasters for assistance. His allies answered the call and dispatched elite operatives to infiltrate the surrounding area on October 13th. They laser marked Oreokastro for a clusterbomb airstrike. It was successful and completely razed Oreokastro to the ground; bringing along every insurgents and villager garrisoned inside it.

Internationally, the airstrike had generated much controversy and his junta was extensively condemned for its decision. Akhanteros rebuked all such criticisms and with the continued backing of his CSAT allies, stayed on as leader of the Republic.

By mid 2035, Akhanteros continued to receive financial aid and military support from both NATO and CSAT. Relations with Akhanteros' government had reached its lowest low point with NATO, while CSAT had become a much more favourable option. In exchange for continued support, CSAT "requested" that Akhanteros lease facilities throughout the island for their exclusive use.

In turn, Akhanteros green-lit numerous installations for CSAT while demanding to NATO leaders that their operation be revoked. Akhanteros succeeded in securing limitations to NATO's peacekeeping mandate, restricting all of their movements to the smaller and depopulated island of Stratis.

Eventually, he was also responsible for ordering the AAF's surprise attack against the U.S.-led peacekeepers of Task Force Aegis, and later leads the country in a defensive war against NATO after they invade the nation in retaliation for the attack.

Defeat was inevitable however, as the AAF had no hopes of winning against the tide of endless NATO forces, while CSAT were in the process of pulling their forces out of the Republic. They ordered Akhanteros to continue defying pressure from NATO; at the very least, last long enough until they could withdraw their personnel.

After the AAF are finally defeated at the hands of joint NATO/FIA forces, Akhanteros agrees to an unconditional ceasefire which puts an end to the brief but bloody conflict.

Akhanteros is briefly seen at the talks between representatives from NATO, CSAT, and the new civilian government of Altis led by Nikos Panagopoulos. Along with Akhanteros himself, they are due to negotiate a joint peacekeeping deal that would oversee the complete demilitarisation of the hardline AAF.

In spite of this, media networks speculate that Akhanteros will nonetheless face international courts over his role in ordering numerous acts of crimes against humanity.

Akhanteros appears as an Altian male rapidly approaching his elder years, sporting a black head of hair frosted with grey and a lightly shaved beard. He wears the standard attire of an AAF officer which consists of a camouflaged uniform and a black beret. On occasion, he can also be seen wearing a pair of aviator sunglasses.

An avaricious and ambitious individual, Akhanteros was an opportunistic populist who used the excuse of taking down the "corrupt" civilian leadership in order to seize power. Typical of strongmen of his calibre, he is shown to quite arrogant and ruthless; caring little for human rights or any other concerns so long as he could maintain his grip on power.

Unsurprisingly, these attributes made him the perfect Manchurian candidate for CSAT to use against the pro-NATO civilian leadership. His propensity for violence and greed in particular, making him easily swayed by promises of economic and military support from the organisation.

But in spite of these "qualities" however, Akhanteros was far from being an efficient politician or military strategist. His open display of corruption trickled down to the lower echelons of the AAF, greatly hampering its morale and disillusioning many. Not only did this result in widespread defections, his inhumane usage of so-called "tactics" would turn much of Altis' citizens against him - ironically helping the FIA to grow as quickly as it did.

Akhanteros in 2026, moments after declaring the formation of his junta in the aftermath of the Kavala Coup. 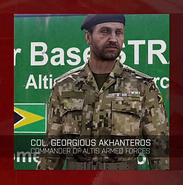 Akhanteros as seen in the intro for Survive.

Akhanteros (centre-left) at the peace talks during the events of Apex Protocol.