The HEMTT is an eight-wheel drive tactical truck that can be used to transport/heal soldiers, and repair, refuel and rearm vehicles.

Features
Aside from the standalone trailer-less tractor unit variant, there are seven more configurations that the HEMTT can be outfitted into. These include cargo, fuel tanker, and medical transport variants.

Mobility
The HEMTT performs decently on and off-road but handles rather poorly at high speeds; not to mention the risk of rollovers when turning on sharp corners as it requires a large amount of space to turn itself even at slow speeds.

Drawbacks
As is to be expected from a vehicle designed purely to operate in a support role, it completely lacks any means to defend itself.

Furthermore, although the cab can resist a limited amount of small arms fire, it is still minimally armoured and should not be seen at the front line except when rearming or refuelling friendly forces.

Crew Capacity
Regardless of the variant, the HEMTT always has at least two seats to fit a driver and a single passenger in the cab of the tractor. 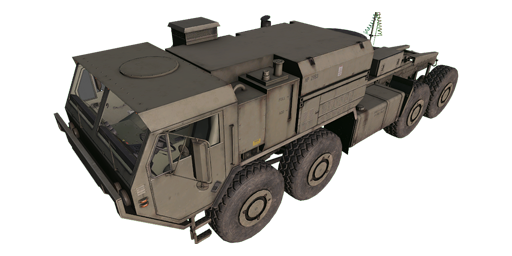 This is the standalone tractor unit that has no trailer attached to it. Has no other capabilities other than transporting a single passenger and the driver themselves. 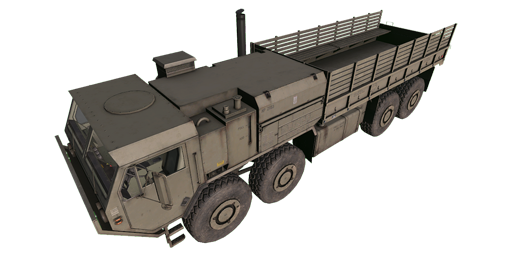 It has an extended, open-top cargo body fitted behind the cab that can transport up to sixteen passengers. The rear two positions are FFV-enabled. 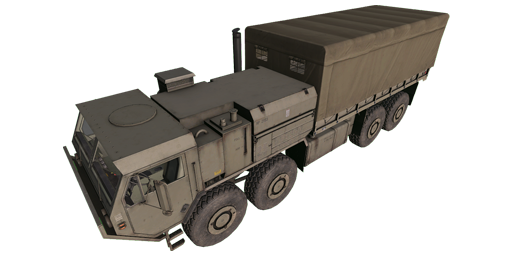 It is identical feature-wise to the regular Transport variant. The sole difference is that the cargo body section is covered with a tarpaulin that can hide troops from view (note that the tarpaulin does not provide ballistic protection). 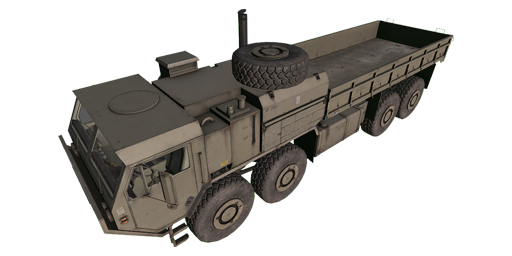 It is visually similar to the uncovered Transport variant but the rear flatbed passenger benches have been removed. Instead, it has Vehicle-in-Vehicle Transportation capability and can load up to three Quadbikes/Karts or one Hunter MRAP.

Like the baseline tractor unit, it can only transport one passenger in the cab. 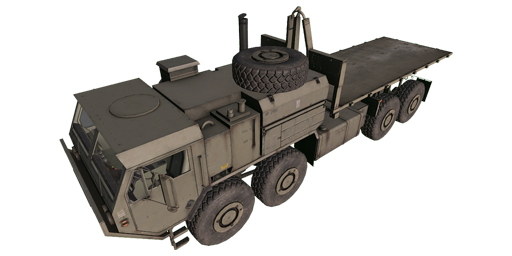 Identical to Cargo variant but the flatbed's railings have been completely removed, supporting several other larger vehicles which would have been obstructed on the Cargo model. 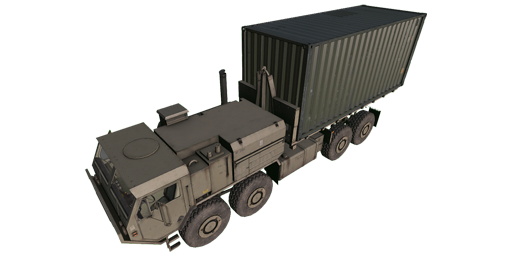 Has a large container box that can store supplies attached to the cargo body trailer behind the cab. Contains the same amount of seats as the baseline variant.

Has a large container box with spare parts, tools, and components that can repair nearby land vehicles and grounded aircraft.

Visually identical to the Box variant and contains the same amount of seats as the baseline variant. 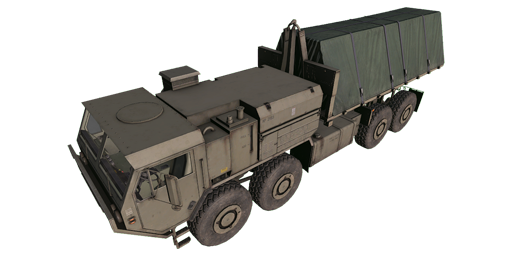 Has a large semi-hexagon shaped, tarpaulin-covered, ammunition supply container fixed to the cargo body trailer behind the cab.

It can re-arm nearby land vehicles and grounded aircraft. Contains the same amount of seats as the baseline variant. 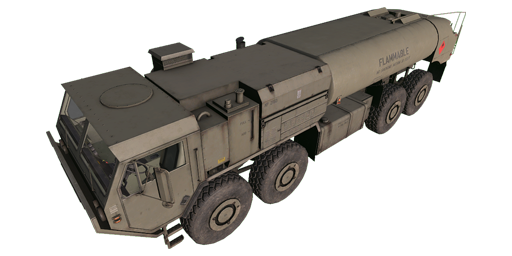 Has a large fuel tanker attached to the flatbed trailer behind the cab. It can refuel nearby land vehicles and grounded aircraft. Contains the same amount of seats as the baseline variant. 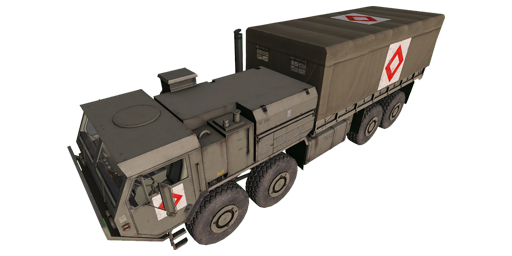 Medical support/transport variant. Its benches and litters have enough space for up to fifteen wounded soldiers (not including the cab driver/passenger).

Unlike the regular transport variants, the two rear passenger seats do not have FFV-capability.

All variants of the HEMTT have base armour values of 200. No model can be outfitted with Explosive Reactive Armour (ERA) blocks/panels or slat cages.

Note that weak point positions remain identical on all variants of the HEMTT with only slight deviations depending on the flatbed (i.e. tanker on the HEMTT Fuel variant). The HEMTT model consisting of only the tractor unit also retains the same weak point locations (minus the flatbed).

The vehicle body on all variants can resist up to 200 points of damage. It incurs a 150% damage penalty from high-explosive (HE) type weapons. Should its integrity fail, it will instantly result in a catastrophic loss regardless of variant.

HEMTT engines can only take 100 points of damage before failure. It has 50% resistance to HE-type weapons. 100% of damage on this component is always transferred onto the HEMTT's main "health" pool.

If damaged: Greatly reduces the engine's power output, the HEMTT can no longer attain its top speed and will have difficulty making simple manoeuvres.
If destroyed: Instantly immobilises the HEMTT.

The fuel tanks can survive up to 100 points of damage. They take 150% increased damage from HE-type weapons. Like the engine, 100% of incoming damage is shared with the HEMTT's "health" pool.

If damaged: Gradually leak fuel over time.
If destroyed: Causes it to rapidly lose its entire fuel capacity in under a few seconds.

All HEMTT variants have eight wheels that can take up to 200 points of damage before bursting. They take 400% increased damage from HE-type weapons. No amount of damage on any of the wheels will be transferred onto the vehicle's "health" pool.

While it's theoretically possible for the HEMTT to continue moving even with half of its wheels missing, the HEMTT's bulky dimensions and weight will make it extremely difficult to drive in a straight line. Depending on whether there are enough tyres on both sides of the chassis left, it might not even be possible to make simple turns.

The Cargo variant can transport most non-medium/heavy armour ground vehicles on its rear flatbed trailer:

Due to the railings being removed on its trailer, the Flatbed variant is able to load several other vehicles in addition to the ones available on the regular Cargo model:

It should be noted that despite the Flatbed variant being capable of storing two AR-2 Darters, the Cargo variant cannot load a single one (other drones are still accepted, however).

Retrieved from "https://armedassault.fandom.com/wiki/HEMTT?oldid=57735"
Community content is available under CC-BY-SA unless otherwise noted.