The Helicopters DLC adds slingloading capabilities for all existing helicopters, allowing them to sling ground vehicles and some aircraft.

Many vehicles now allow passengers in certain vehicle seats to utilise firing from vehicles (FFV). An optional Advanced Flight Model (AFM) can also be enabled on all helicopters, providing pilots with a significantly more in-depth simulation of rotary-wing flight.

Other additions include new placeable objects and props for use in the Eden editor. The M900 helicopter, a civilian variant of the MH-9 Hummingbird used by NATO forces, was also added as part of the free platform update.

(*) Denotes premium content that is only available to DLC owners.
(**) Denotes free content included as part of the platform update. 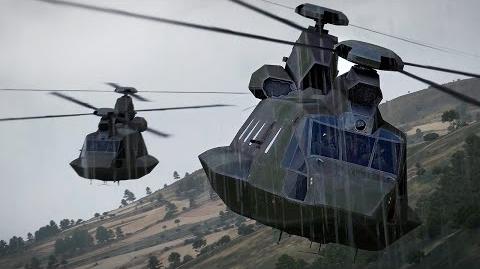