Holosights are a type of non-magnifying weapon sights featured in both ArmA 2 and ArmA 3.

The Holosight is used by several BLUFOR and INDFOR factions in ArmA 2.

Weapons fitted with a Holosight were usually suffixed with as Holo or HWS at the end of their display name to signify that they are fitted with holographic sights.

It is available on the following platforms:

All holosight variants use a simple red-tinted 2-Dot Ring reticle. In contrast to other close combat sights like the CCO or Russian-made Kobra, Holosights are zeroed specifically for short-range firefights.

However, their usefulness typically falls off rapidly for long-ranged engagements at distances of 200 metres and beyond. The reticle markers do not provide much (if any) assistance in estimating ranges at those distances.

The Mk17 Holosight is used by several BLUFOR, REDFOR and INDFOR factions in ArmA 3.

With the implementation of the dynamic weapon attachment system in ArmA 3, Holosights are no longer "fixed" attachments on weapons. They can be freely removed or attached onto any weapon featuring a compatible top rail.

It is commonly attached to carbines and assault rifles, serving as an alternative to the ACO. The standard Mk17 Holosight has a fixed zeroing of 200 m and uses a red-tinted 2-Dot ring reticle.

A dedicated SMG variant is also available for mounting on submachine guns as well, though these models use cross-dot reticles with a fixed zeroing of 100 m instead. 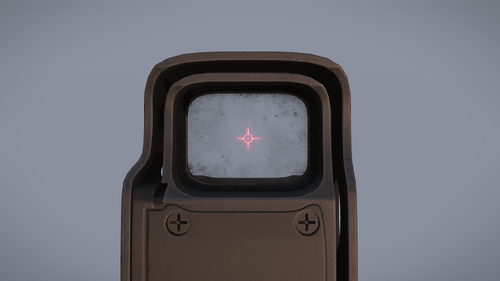 Unlike the standard variant, it uses a red cross-dot reticle.