The Hunter is an MRAP used exclusively by NATO forces in ArmA 3.

The Hunter is a four-wheel drive, all-terrain, MRAP-type vehicle. Primarily intended for use in counter-insurgency operations, it is multi-role and can act as both a troop carrier and supply vehicle if needed.

Features
It is available in three variants; a baseline unarmed version that has no weapons mounted on it, and two separately armed versions that have a mounted RCWS turret. The RCWS turrets on the armed variants can either utilise a 12.7 mm heavy machine gun or 40 mm automatic grenade launcher.

The driver sits in the front left seat, with two small armoured front windows providing a narrow view of the area in front of the vehicle (at the cost of reduced visibility). The front-right and rear seats can hold anywhere from one to three passengers, of which none have any control over any of the vehicle (except in the case of the armed variants).

Notable Traits
Protection-wise, the Hunter is equal to, if not better, than its CSAT counterpart due to the driver not being exposed by a large windscreen. It is designed to be resistant against small arms fire ranging from 7.62 mm and up to 12.7 mm.

Unlike its softer-skinned AAF counterpart, it is well armoured enough to be able protect its passengers from medium to large explosives (like 40 mm grenades or demolition charges) and land mines/Improvised Explosive Devices (IED). This is because the Hunter uses a V-shaped hull that is designed to deflect the blast away from vital components in the chassis.

Mobility
In terms of mobility, the Hunter has decent acceleration and handling on both paved roads and while off-road. However it cannot match the Ifrit when it comes to speed due to being much heavier, nor the manoeuvrability or amphibious capability of the Strider.

Drawbacks
The Hunter's use of a V-hull is somewhat of a disadvantage in that while it makes the vehicle resistant to IEDs, it also raises the Hunter's centre-of-mass significantly as well. This means that it is entirely possible for the driver to accidentally cause a rollover when turning around corners at high speeds, or when just driving down sloped terrain.

Crew Capacity
Regardless of the variant, the Hunter always has a seating capacity of four personnel; the crew and up to either two/three passengers. The crew includes the driver, and in the case of the armed variants, a gunner as well, leaving enough space for up to two dismounts. 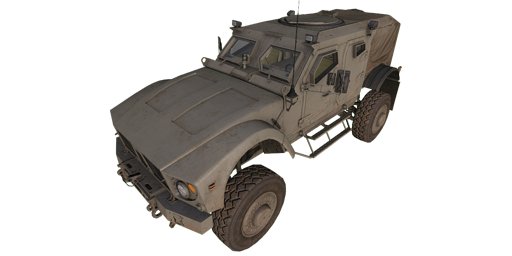 This version seats a driver and up to three passengers. This version is also unarmed and is designed purely for transporting troops. 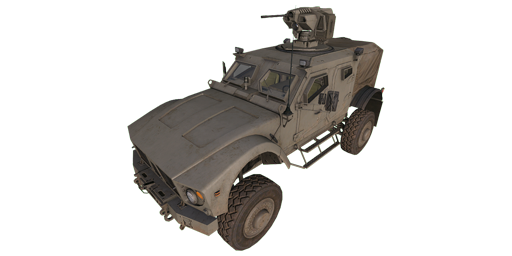 Armed version of the Hunter.

Using the unarmed version as the base, the sole difference is the RCWS turret placed atop, which has a 12.7 mm heavy machine gun fitted to it.

The HMG RCWS comes pre-loaded with a single 200-round belt of 12.7 mm ammunition, and has a spare belt of another 200-rounds in reserve. The gunner sits in the rear left seat and controls the RCWS turret via the control station fixed behind the driver's seat. 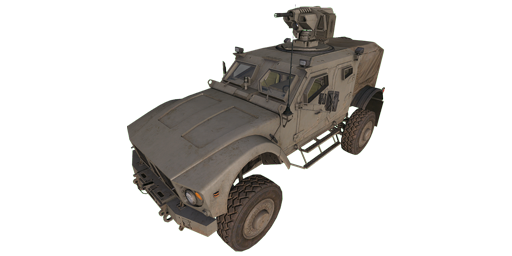 Armed Hunter with an altered loadout.

Functionally identical to the HMG variant, with the sole difference being its choice of armament as this variant uses a 40 mm automatic grenade launcher instead. The GMG RCWS only has a single 96-round belt of 40 mm high-explosive (HE) grenades loaded.

All variants of the Hunter have base armour values of 200 and use Composite Armour plating. They cannot be fitted with Slat cages or Explosive Reactive Armour blocks/panels.

The following highlighted positions serve as weak points on the Hunter:

Note that although only the armed Hunter variant is depicted here, hit zones are identical for all models regardless of configuration with the exception of the turret.

The Hunter's body can survive 1,200 points of damage. It takes 150% increased damage from high-explosive (HE) type munitions.

Depletion of the body's integrity will result in a catastrophic kill.

The hull can resist up to 200 points of damage. 50% of damage is always shared with the Hunter's main "health" pool.

The engine can survive 100 points of damage. It takes 20% less damage from HE-type munitions. At least 30% of damage inflicted onto the engine will be shared with the Hunter's main "health" pool. Destroying the engine will not result in a catastrophic kill unless the Hunter is critically damaged.

If damaged: Reduces power output, acceleration is decreased and it may become impossible to climb uphill.
If destroyed: Instantly immobilises the Hunter.

The fuel tank can resist up to 100 points of damage before it ruptures. It takes 20% reduced damage from HE-type munitions.

If damaged: Gradually leak up to 50% of fuel over time.
If destroyed: Causes it to rapidly lose its entire fuel capacity over the course of several seconds.

All four wheels are able to take up to 250 points of damage. The tyres are susceptible to small arms fire and receive 400% extra damage from HE-type munitions. No amount of damage upon them will be transferred onto the Hunter's main "health" pool, however.

Destroying all of the Hunter's wheels will be needed to immobilise it completely. Depending on which of them were disabled and how many remain functional, it is entirely possible for the Hunter to continue driving even with three out of four tyres missing (though making simple manoeuvres will be almost impossible).

The RCWS turret on armed variants can resist up to 250 points worth of damage. No amount of damage incurred will be shared with the Hunter's "health" pool.

The gunner position exclusively controls all weapon systems remotely on the armed variants. The gunner's optics have variable zoom capability, and can toggle either a day, night or black-/white-hot thermal vision mode:

NOTE: Only available on the Hunter HMG variant.

The Fire Control System is only able to automatically zero on stationary targets and requires 1 second to finish adjusting. Manual zeroing is also possible, though only in increments of 100 m up to a maximum of 1500 m.

NOTE: Only available on the Hunter GMG variant.