Armed Assault Wiki
Register
Don't have an account?
Sign In
Advertisement
in: Sub-factions, Laws of War DLC, IDAP,
and 3 more

The International Development & Aid Project (short form: IDAP) is a Non-Government Organisation in ArmA 3. It was added with the release of the Laws of War DLC.

Founded in mid 1916, the IDAP is a Dutch NGO that specialises in responding to natural and man-made disasters. Since its founding, the IDAP has provided humanitarian aid to more than sixty million people worldwide and continues to run missions throughout the Green Sea region, Central America, Southern Europe, West Africa, and the South Pacific.

The IDAP also deploys its teaching staff to instruct military personnel on the Laws of Armed Conflict (LOAC) and the dangers of landmines and Unexploded Ordnance (UXO) to civilians. Informative sessions and open days - which are also available to the general population, are usually run simultaneously with their aid missions.

Their main headquarters are located in Amsterdam, The Netherlands.

IDAP's field operations are predominately carried out by volunteer aid workers who form the bulk of the manpower at each crisis centre.

Ex-military servicemen are also a key part of the organisation's structure, and serve as field consultants for Explosive Ordnance Disposal (EOD)-related matters.

IDAP maintains a complex supply network that supports almost fifty crisis centres across the globe. They are all supplied through IDAP's main hub located in Amsterdam.

Aid packages can vary depending on the crisis, but are almost always delivered in the form of cardboard boxes or wooden/plastic pallets.

Shortly after the outbreak of the First World War, more than a million displaced Belgians were forced to flee from the bloodshed and destruction of their homes. To address the growing crisis, a Refugee Council (Dutch: Vluchtelingenraad) was set up in the city of Leiden, South Holland in the Netherlands.

Amongst the roots of what would soon form the foundations of the modern day IDAP was Lars Blanken, the only son of Mathjin Blanken. His father was a shipbuilding tycoon who profited immensely from the fighting between the Allied and Central Powers.

In the summer of 1916, Lars suddenly inherited his father's empire due to a series of unforeseen circumstances.

Though disgusted with his father's wealth, which he scathingly described as "bloedgeld" (Dutch for "blood money"), Lars opted to invest his newfound funds into the Refugee Council instead; essentially becoming its primary sponsor. He greatly expanded the RC's scope to provide food and clothing to refugees and war deserters alike from the Western Front.

Following the conclusion of the Paris Peace Conference in 1919, the Refugee Council turned its attention to rebuilding wartorn Europe. They supplied emergency aid to dispossessed citizens forced to relocate overseas.

At this point, Lars and the rest of the RC's founders realised it was no longer a domestic humanitarian aid agency, but that of a global one. It was subsequently renamed to the International Development Council (Dutch: Internationale Ontwikkelingsraad).

In 1973, the burgeoning IDC was finally renamed into its present day name: the International Development & Aid Project (IDAP).

The IDAP was deployed on a mission in the early 2020s to the Green Sea nation of Takistan. The country was still in a state of near anarchy with warring tribes battling one another and the government.

Specialists were sent to assist NATO forces in helping to de-mine the region. Aid workers reinforced existing NGOs being overwhelmed by the ongoing humanitarian crisis.

In the first year of the civil war between Altian government Loyalists and the hardline Altis Armed Forces, IDAP had dispatched a consignment of its aid workers to address the country's growing humanitarian crisis. Workers delivered supplies to civilians supporting both sides but otherwise remained uninvolved with the fighting.

As part of a temporary ceasefire agreement signed between the two factions, an IDAP supply convoy was cleared to be sent through to the mountain village of Abdera on May 11th. However, paramilitary groups allied to the AAF blocked the mountain roads leading into the village as it was settled by pro-Loyalist supporters. The paramilitary fighters deliberately withheld safe passage to delay the aid shipments from getting through.

To the surprise of the convoy's aid workers, the Loyalists had planned to launch an all-out assault against their blockade and for good measure, also seized the nearby village of Galati.

Thanks to their efforts, the blockade was finally broken and IDAP's convoy was allowed to pass through unscathed hours later.

The IDAP dispatched aid workers to the Marmara Region, Turkey, following the outbreak of the Marmara Crisis in 2027. Large quantities of fresh water supplies and food rations were distributed to locals as the situation worsened over the subsequent weeks and months.

IDAP once again responded to calls from the Green Sea nation of Chernarus, after numerous reports of civilian deaths caused by land mines pour in.

Numerous explosive specialists supported government forces in helping to complete the demining operation in the South Zagoria region. Many of the mines were scattered deep within the sprawling Black Mountains forest and were leftovers of the civil war over two decades prior.

As part of the organisation's ongoing global demining campaign, a team of EOD specialists were dispatched to the Federal Republic of Nigeria. They assisted locals in clearing out suspected minefields in the more isolated regions of the country.

IDAP aid workers were dispatched to the South Pacific island nation of the Horizon Islands.

They assisted the local government in various duties ranging from providing aid to remote villages affected by tsunamis and other natural disasters, and supporting domestic relief agencies.

IDAP missions were conducted in two major regions of the globe:

The shaky ceasefire between South and North Lombakka continued to hold firm. However, many civilians in the northern regions of the South's border were constantly caught up in accidents involving land mines leftover from the civil war.

IDAP provided aid to farmers forced to relocate into the larger cities to find work.

The end of the civil war and the signing of the Jerusalem Cease Fire agreement in 2030 would mark an end to the war between the (now defunct) loyalists and the AAF. However, a renewed wave of fighting would break out once more after a new insurgency was formed to resist against the new Altian government.

Four years later, IDAP continued to run its missions in isolated villages and settlements throughout the mainland with the explicit approval of the incumbent government. However, one of their camps based in the mountain village of Oreokastro becomes a major focal point of the fighting when government forces lay siege upon the village due to its armed occupation by the insurgents.

The village is ultimately destroyed when government troops raze it with cluster bombs. The camp was left intact, but the utter destruction forces them to abandon it after government forces evacuate what was left of the remaining survivors and aid workers.

IDAP aid workers continued to run their missions throughout the country in spite of the loss at Oreokastro. Their priorities were predominately focused on demining operations, though supporting civil war refugees and those displaced by the second NATO invasion were also their main priority.

The mission in the Horizon Islands was also extended in light of the South Pacific Disaster, which devastated large parts of the main islands. The situation was further exasperated by the outbreak of fighting between security forces and the rise of an anti-government insurgency calling itself the "Syndikat".

Aid teams were immediately dispatched to the Horizon Islands following the outbreak of a super-strain of malaria.

However in spite of their best efforts, doctors and aid workers were unable to stop the diseases' spread as for unexplained reasons, this new strain was simply untreatable by any known means of anti-malarial medication.

The IDAP relies on a myriad of commercial off-the-shelf civilian and re-purposed military assets for its operations.

Land mine removal technicians and aid workers also rely on a mixture of specialist-made EOD/general-purpose and medical delivery drones to carry out various tasks. Some land-based UGVs are also utilised as modern day robotic mules to handle heavy cargo.

Victims of landmines from all walks of life are often interviewed by the IDAP, as part of a series to promote awareness of the dangers they pose - not just to military personnel but to civilians as well: 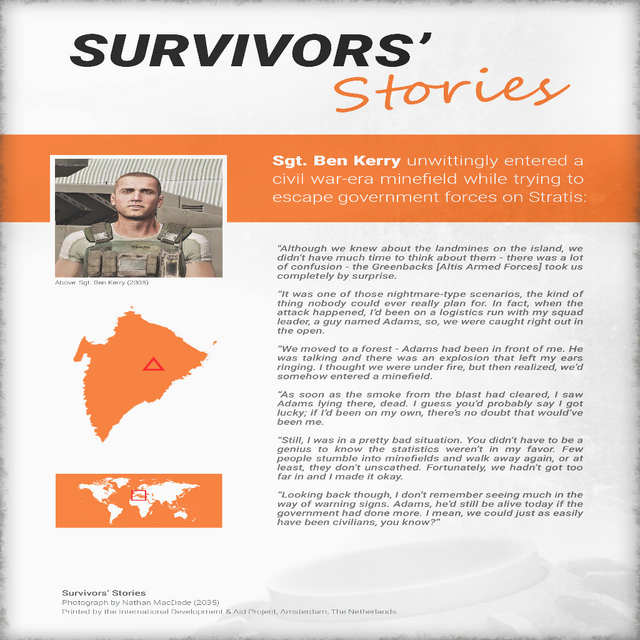 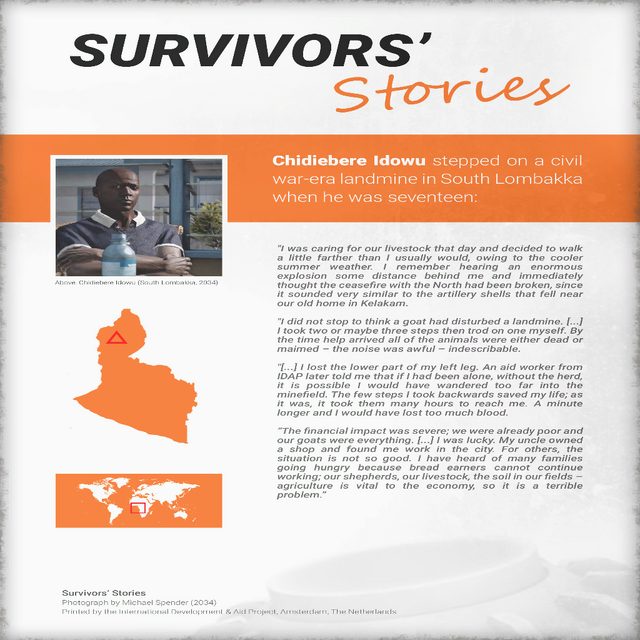 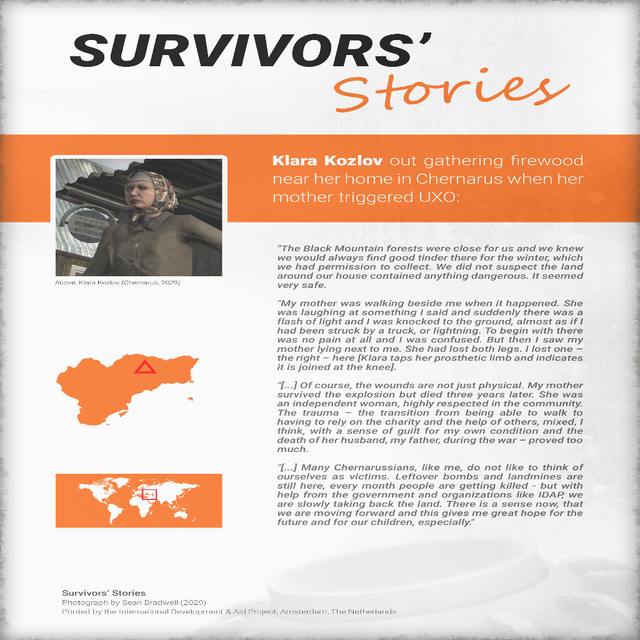