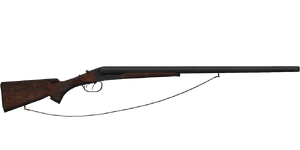 The ISh-54 is a 12G shotgun used by Viet Cong guerillas and in limited numbers with PAVN forces in ArmA 3. It was added with the release of the S.O.G. Prairie Fire Creator DLC.

The ISh-54 is a break-action shotgun that is designed to fire 12 Gauge shotshells.

It can only load two buckshot-type shotshells at a time, and has a maximum fire rate of 120 rounds per minute with a muzzle velocity of 300 m/s. The ISh-54 cannot be fitted with an optical sight, nor is it possible to mount a bayonet. 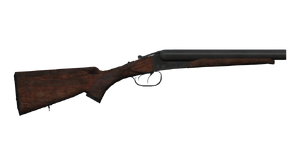 The Sawn-off variant features a barrel that has been cut down in length.

It is lighter by 20 "mass", and inertia penalties compared to the baseline ISh-54 have been lowered. Likewise, the user's dexterity is also higher as a result, allowing it to be wielded more easily in close quarters.

However, a consequence of its shortened barrel is a sharp reduction in accuracy. Dispersion on this model specifically is increased by ~ 33%, and recoil is also slightly higher (though not by a significant margin). 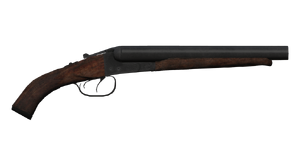 The Sidearm variant has had its stock sawed off completely and shares the same shortened barrel of the Sawn-off model.

Unlike the other two ISh-54s, the Sidearm variant is equipped as a sidearm and does not occupy the user's primary weapon slot.

This allows the user to carry an alternate long arm of their choice without having to haul a backpack. It is also the lightest of the three and can also be stored within a vest provided that it has sufficient capacity to do so.

As with the Sawn-off variant however, the Sidearm model suffers a further reduction in accuracy due to its cut barrel, and its recoil is even greater due to the stock's omission.

The full-length ISh-54 is restricted to loading only one type of "magazine". The Sawn-off and Sidearm models on the other hand, retain the option of loading two types of "magazines".

No matter the variant, both have identical "mass" values of 6 units:

Up to twelve pellets will be dispersed within a 0.5 degree cone using Poisson disc sampling.

Alternate buckshot "magazine" intended for use on the Sidearm and Sawn-off variants.

In contrast to regular "magazines", its twelve pellets are scattered within a much wider 3 degree cone (its pattern is also arranged via Poisson disc sampling).