The Ifrit is an MRAP used exclusively by CSAT forces in ArmA 3.

The Ifrit is a four-wheel drive MRAP-type vehicle that can fulfil many roles ranging from serving as a V.I.P. transport, escort vehicle, light troop transport, to reconnaissance. All in a well-protected and compact package.

Features
It is available in three variants: a baseline unarmed version that has no weapons mounted on it, and two separately armed versions that have a mounted RCWS turret fitted with either a 12.7 mm heavy machine gun or 40 mm automatic grenade launcher.

The geometry of the Ifrit is rather sleek and futuristic looking. It uses a sloped front that curves a bit at the corners, the sides and rear being flat at the top and sloping in the middle, and then flat again. The bottom is slightly sloped, as is the roof, to protect against land mines and small-medium explosives.

Mobility
With a top speed of 137 km/h combined with its large fuel capacity, the Ifrit excels at long-range or long-duration missions where refuelling would not be possible or for rapid missions that require high speed and mobility above all else. It also has a smoke generator fitted behind the vehicle that can be used to deploy a thick cloud of smoke that obscures it from view in an emergency.

Notable Traits
One aspect that makes the Ifrit above-average compared to its NATO and AAF counterparts is the crew placement.

The driver is placed in a separate section to the front that has a excellent visibility due to the large slanted windshield. Meanwhile, the rear of the vehicle, depending on the model, holds the gunner and up to three or four passengers. They are able to see outside through the eight low-profile, long windows along the side and corners of the compartment.

Drawbacks
Although it is well-armoured enough to protect its passengers against small arms fire, it cannot survive prolonged fire from against anything larger than 12.7 mm rounds. The wheels are also vulnerable to being shot out, as they are rather exposed and only have small armour plates flanking them from above and in front.

As previously noted, the driver is positioned in the front. The front and rear is divided by a wall of bars and screens, allowing the passengers to still communicate and visually see the driver but being separated from them. Depending on where a passenger (or the gunner) is seated, they will either see a screen or nothing else but steel bars. The two other seats positioned even further in the rear provide have limited visibility and little room to manoeuvre.

Crew Capacity
Regardless of variant, the Ifrit will always have a seating capacity of five personnel; the crew and three or four passengers. The crew includes the driver, and in the case of the armed variants, a gunner as well, which leaves enough seats for up to three dismounts. 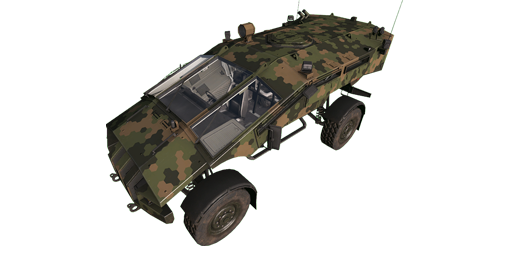 This version seats a driver and up to four passengers. It is designed purely as a troop transport and does not have any armament. 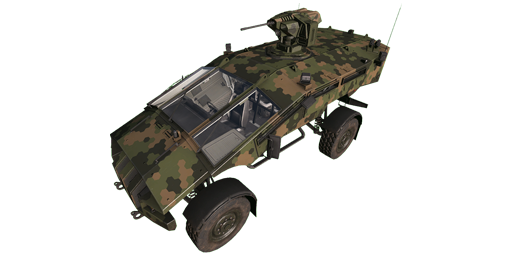 Armed version of the Ifrit.

Using the unarmed version as the base, the sole difference is the RCWS turret placed atop, which has a 12.7 mm heavy machine gun fitted to it that has a single 200-round belt of 12.7 mm ammunition pre-loaded and another spare belt of 200 rounds in reserve (for a total of 400 rounds).

The RCWS is controlled by the gunner, whose seat is located in the front-left in the rear. The previously vacant passenger seat now serves as the control station for the turret. Other than that, its layout remains identical to the baseline Ifrit. 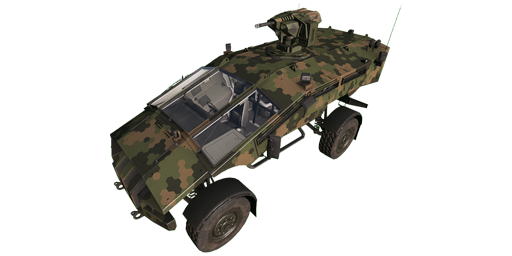 Another armed version of the Ifrit.

It also uses the unarmed version as the base, with the sole difference being the RCWS turret placed atop. The GMG variant uses a 40 mm automatic grenade launcher with a single belt of 96 40 mm high-explosive (HE) grenades. The RCWS is similarly controlled by the gunner, who is located in the same front-left seat in the rear.

All variants of the Ifrit have base armour values of 200. They use Composite Armour plating but cannot be fitted with Slat cages or Explosive Reactive Armour blocks/panels.

The following highlighted positions serve as weak points on the Ifrit:

Note that although only the armed Ifrit variant is depicted here, hit zones are identical for all models regardless of configuration with the exception of the turret.

The Ifrit's body can survive 800 points of damage. It does not take additional damage from high-explosive (HE) type munitions but also does not reduce any amount.

Will result in a catastrophic kill if its integrity is compromised.

The hull can resist up to 200 points of damage. Only 20% of incoming damage will be shared with the Ifrit's main "health" pool.

The engine can survive 100 points of damage before it fails. At least 40% of incoming damage will be shared with the Ifrit's main "health" pool. The engine takes 40% less damage from HE-type munitions.

Destroying the engine will not cause a catastrophic kill unless the Ifrit is at critical "health" status.

If damaged: Reduces power output, acceleration is decreased and it may become impossible to climb uphill.
If destroyed: Immobilises the Ifrit.

A destroyed fuel tank will not cause a catastrophic kill on its own unless the Ifrit is critically damaged.

If damaged: Gradually leak 20% of remaining fuel over time.
If destroyed: Entire fuel supply will be drained over the course of several seconds.

Each of the Ifrit's wheels are able to resist up to 250 points of damage. The tyres are susceptible to small arms fire and take 400% increased damage from HE-type munitions. However, none of the damage will be shared with the Ifrit's main "health" pool.

Destroying all of the Ifrit's wheels will be required to fully immobilise it. Depending on which and how many are left, it is entirely possible for the Ifrit's driver to continue moving even if there is only one tyre left (making simple manoeuvres will be almost impossible, however).

The RCWS turret on armed variants can resist up to 250 points worth of damage. No amount of damage incurred is shared with the Ifrit's "health" pool.

The gunner position exclusively controls all weapon systems remotely on the armed variants. The gunner's optics have variable zoom capability, and can toggle either day, night or black-hot/white-hot thermal vision modes:

NOTE: Only available on the Ifrit HMG variant.

The Fire Control System is only able to automatically zero on stationary targets and requires 1 second to finish adjusting. Manual zeroing is also possible, though only in increments of 100 m up to a maximum of 1500 m.

NOTE: Only available on the Ifrit GMG variant.