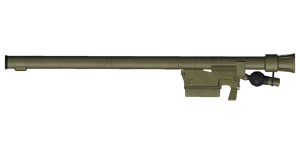 The 9K38 Igla is a 72 mm surface-to-air missile launcher used exclusively by the Russian Armed Forces in ArmA 2.

The 9K38 Igla is a shoulder-launched, man-portable surface-to-air missile launcher.

It is designed to be loaded with 72 mm infrared-guided missiles fitted with high-explosive fragmentation (HE-Frag) warheads only, and is highly effective against helicopters and low-flying fixed-wing aircraft. It utilises a simple ironsight for aiming and has a hollow circular post reticle. The 9K38 has an effective range of between 3,100 and up to a maximum of 5,200 metres.

The 9K38 is a powerful SAM launcher used by Russian military forces deployed to Chernarus. Unlike its older predecessor, the 9K38 uses an improved IR seeker that has increased resistance against aircraft countermeasure flares, as well as significantly increased range and accuracy.

Compared to its American counterpart, the 9K38 is superior in every aspect. Not only does the launcher itself have a greater maximum lock-on range of 5,200 metres versus the Stinger's maximum of 4,800 metres, but its missiles fly slightly faster and can turn more sharply in midair to counter aircraft attempting to outmanoeuvre it.

However, it is recommended to operate the 9K38 in two- or three-man teams who can haul additional missiles for the main operator. This is because each missile requires six inventory slots which will cause its user to run out of missiles after just a single shot (unless they choose to forgo carrying ammunition for their primary weapon altogether).

Nonetheless, the 9K38's upsides far outweigh its sole downside (inventory space). They essentially make the 9K38 the undisputed man-portable SAM launcher to bring onto any mission where enemy aircraft are expected to show up. Short of being in a bad position or heavy flare usage by the target, the 9K38 will almost always never miss its target.

The 9K38 is only capable of loading and firing one type of missile. It requires six free inventory slots to carry:

The missile will only require an extra 1.5 seconds to reach a maximum flight speed of 800 m/s. The warhead has a blast radius of 8 metres while the seeker has a 20% susceptibility to flare countermeasures.