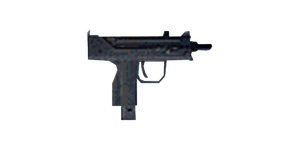 The Ingram is a .45 submachine gun used exclusively by the Nogovan Partisans in ArmA: Cold War Assault.

The Ingram is a straight blowback-operated, selective-fire submachine gun that is chambered to fire the .45 ACP round.

It loads from 30-round box magazines, and can attain a fire rate of up to 600 rounds per minute with a muzzle velocity of 375 m/s. It has fairly unobtrusive ironsights, but only retains an effective firing range of approximately 100 metres.

The Ingram is exclusively wielded as a backup weapon by guerilla snipers. Due to its combination of a large magazine, the ability to fire on full auto, as well as being relatively lightweight and compact to carry, the Ingram makes for a good backup weapon for specialist infantry classes.

Being a personal defence weapon rather than a true SMG however, the Ingram's range is quite pitiful and cannot be used to engage targets that are further than 100 metres away.

It also suffers from having significantly high recoil while firing on auto, so it is recommended to shoot in bursts of 2-3 rounds at a time; both to conserve ammunition and to maintain accuracy.

The Ingram only supports loading a single magazine type. It requires one inventory slot to carry: