A Spetsnaz commando from the 223rd Special Purpose Detachment, Severov directs all operations in the Eastern European country of Livonia. He goes by the radio callsign of Shashka.

Prior to his deployment to Livonia, Severov had already served one tour of duty in the Green Sea nation of Ardistan.

However, ever since the 2020 incident in Olom, Siberia, his main focus in the 223rd has been attempting to track down remnants of an unknown alien race known only as "The Visitors".

Utilising handheld neutrino streamer devices, otherwise dubbed as "Bouncers", he and his men have continued to trace the network of extraterrestrial "roots" spread across the planet.

On June 17th, 2039, at the height of NATO military exercises in Livonia's Nadbór region, one incident captured the attention of Severov's team. A NATO UCAV had accidentally dropped a bomb at the centre of the SIŁA Factory, triggering a massive burst of neutrinos into the sky.

According to their data, the bomb site had uncovered the "rootcap" of a larger network that originated in Livonia. Fearing a repeat of the Olom incident, Severov's team attempted to convince locals in the area to remain calm and alert them to his team's presence, by having aircraft from Russia disperse leaflets throughout the region.

Unfortunately, it didn't help that tensions between his country and NATO were on the rise with both the friendly fire incident and anti-CSAT paranoia muddying the situation. Many viewed the leaflets not as informative papers, but as propaganda and disinformation from the Russian government.

On July 3rd, Severov's team requested for more equipment to speed up their tracking efforts. However, the helicopter carrying the Bouncer that they needed was shot down by anti-air missiles. Although Severov didn't know it at the time, an American soldier had reached the crash site and (unknowingly) took the device. Eventually, Severov's team spotted American soldiers setting up an improvised camp at the base of a radio tower. Curiously, they also saw scientists from Astra hiding alongside them.

They waited until two of the soldiers left the camp before ambushing the ones who stayed behind. Severov made sure to avoid killing anyone; they were simply tied up and left inside the shed. Unexpectedly, the American who had taken the Bouncer also returned but they didn't realise the device was on him at the time. Once the man entered the shed, Severov simply locked him in alongside the others.

Severov discussed their next course of action with his senior subordinate, Sergeant Boris Krupin. Since they no longer had access to the Bouncer, mapping the alien network was out of the question. Their presence was also known now by their captives, with Krupin suggesting that they should perhaps silence their witnesses. Severov disagreed, and opted instead to initiate their backup plan: weaken the Livonian defences and attempt to follow the paths of the alien drones. They promptly left the camp before the remaining two Americans returned.

Hours later, Severov followed one of the drones before seeing it stop above the transmitter overlooking the (former) American base at Camp Kresnik. One of the American soldiers were seemingly attempting to communicate with the drone using a handheld device. After a brief moment of observing the drone "talk" to the soldier, he was rendered unconscious.

Severov decided to approach the Americans peacefully. After a moment of tension between the two sides, he tried to convey the purpose of their arrival in (albeit broken) English. None of the Americans could understand Russian but the soldier who had been knocked out was able to. Once the soldier regained his senses, Severov began explaining the situation to the man, who identified himself as Specialist Aiden Rudwell.

He explained that the incident at Olom was triggered when miners, attempting to drill for oil, accidentally struck and destroyed one of the alien "rootcaps". Its detonation, equivalent to a thirty megaton nuclear device, devastated the entire surrounding region with the Russian government deciding to cover up the incident as the supposed aftermath of a "meteor strike".

But the difference between the cap at Olom and the one in Nadbór was that the former had been inactive, which meant that its destructive effects were limited. In comparison, the one in Nadbór was active and its detonation would far surpass it; the most generous estimates of its ensuing damage would result in parts of Poland, Russia and Belarus being wiped out. Needless to say, Livonia itself would cease to exist completely.

Their worst fears were confirmed when a flight of Livonian jets flew overhead and began launching missiles at the alien ship, which had stayed motionless over the factory grounds since its arrival. Short on time and lacking numbers of his own to halt the Livonians directly, Severov decided to recruit the Americans. The Americans didn't take much convincing and quickly agreed to join forces with Severov.

Together, the Russo-American team decides to split up into three groups: Corporal Jack Stype and Lieutenant John Kingsly would take care of the incoming reinforcements and artillery (respectively), while Severov's own men under the command of Krupin would assault the factory grounds with Rudwell.

Severov designated their plan with the codename "Thunder Child". He would remain behind to coordinate their movements and attempt to contact the General in Kaliningrad. Hopefully, the General's forces would be able to mobilise in time to secure the core before the Livonians could inflict any further harm.

Initially successful, the plan suffers a setback when a second pair of launchers are heard firing elsewhere in the nearby forest. With ground troops now planting explosives at the base of the core, Severov's men would have no time to divert from their route. Luckily, Rudwell suggested that he split off alone to find them using his Spectrum Device. Severov agreed to his request, and gave him his own callsign of Kinzhal.

Rudwell was able to quickly hunt down the remaining launchers, buying Severov's team a little more time to breach the factory grounds. Kingsly's team had also succeeded in eliminating the artillery launchers. But by now, the alien ship had departed and left the core vulnerable to ground fire. It was no longer able to retaliate against the Livonians and its integrity was failing by the second. To make matters worse, the Livonians had managed to cut their way through Stype's defensive line and were dispatching a massive wave of armoured vehicles.

Realising the situation would soon spiral out of control, Severov requested for immediate reinforcements, calling for Shikra fighters and paratroopers from the Baltic Fleet bases in Kaliningrad to assist. The General informed him they were only a few minutes out, but Severov would have to hold out until they arrived.

Krupin and Rudwell consolidated at the base of the core and dug themselves into position, laying traps to delay the Livonians. Unsurprisingly, they were still pinned down by heavy fire and could do little but wait...and hope.

Suddenly, a flight of jets buzzed over the core and bombarded Livonian positions with a hail of missiles and rockets. Heavy gunships wiped out the drones with a barrage of cannon fire, while parachutes blanketed the skies above the factory grounds. Severov's men could finally breathe a sigh of relief: airborne reinforcements had arrived at long last.

With the initiative regained, Severov's team pressed their advantage and pushed forward to fight off the remaining attackers.

As more Russian troops poured into the area, Severov's team remained behind to assist the incoming EOD teams and science personnel in stabilising the severely damaged core. He had also requested for a transport to airlift the Americans out of the country, though they would unfortunately have to stay in quarantine for at least a month until it was safe to release them.

On the flight out of Nadbór, Lt. Kingsly cautioned Severov against allowing politicians to get their hands on the alien technology. Severov sheepishly concurred, but stated nonetheless that it was out of his team's hands now. He bid the Americans one final farewell before returning to the task at hand.

A Slavic male with short, brown-coloured hair and a lightly shaved beard, Severov wears the same attire of all Spetsnaz operatives deployed in Eastern Europe. It consists of an olive green mountain uniform, chest rig and a field cap with a headset attached. 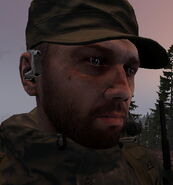