The Jackal 2 MWMIK (full name: Mobility Weapon-Mounted Installation Kit) is an Armoured Patrol Vehicle used exclusively by the British Army in ArmA 2. It was added with the release of the British Armed Forces DLC.

Armament
It is available in two variants that are armed with either a .50 cal heavy machine gun or a 40 mm automatic grenade launcher fitted onto the turret ring above the vehicle's roll cage.

Both variants also have a 7.62 mm medium machine gun fitted to the left-side front seat which is manned by the Jackal's commander. Unlike the turret-mounted HMG/AGL, the L7A2 GPMG is forward-facing only.

Features
The Jackal's chassis uses a four-wheel arrangement that is fully suspended by a sport-type independent double wishbone (air-adjustable ride height) system. As a weapons platform, the Jackal's turret ring is fully rotatable and provides a clear view around the entire car, offering a complete 360 degree engagement angle.

Unlike the softer-skinned (and completely unarmed) Military Offroad, the Jackal is designed to be used in situations where ambushes are expected. It can average speeds of up to 134 km/h on- and off-road, and has an absolute top speed of 150 km/h.

Similar to the Russian-made Vodnik, the Jackal lacks a direct counterpart in terms of its role. Though it can transport a crew of five, it's not considered to be a light utility/troop transport vehicle like the U.S. HMMWV or the Russian UAZ-469, but is better protected against small and medium-sized explosives.

On the other hand, it isn't as well-armoured as the AAVP-7A1 nor is it as well-armed as the BPPU-fitted Vodnik. The only advantage it retains in this case is that it has better manoeuvrability than the former two and has decent off-road capabilities. Essentially, the Jackal fills a gap in the British Army's arsenal for a fast troop transport and gun truck.

Drawbacks
The Jackal's main downside is how exposed the crew and its passengers are. Unlike most wheeled vehicles in its class, it lacks a roof which renders its riders completely vulnerable to small arms fire. As a result, the Jackal relies heavily on its good mobility to keep its cargo out of harm's way.

Crew Capacity
Regardless of the variant, the Jackal always has a crew of three that consists of the driver, the gunner, and a commander. It can transport two more passengers who sit in the centre of the vehicle (beside the gunner's turret ring). 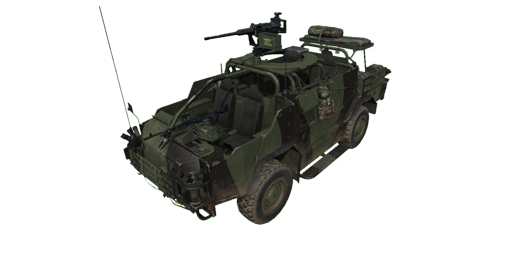 Baseline variant. Armed with a .50 cal heavy machine gun fitted to the turret ring located in the centre of the vehicle.

The L111A1 HMG comes pre-loaded with a single 100-round belt box of .50 cal ammunition, and has another five boxes left in reserve. The L111A1 can be zeroed up to a maximum distance of 1,500 metres. 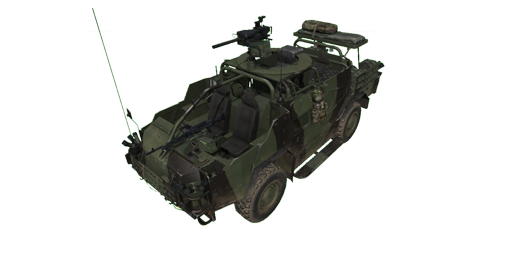 Identical to the baseline HMG variant but has a 40 mm automatic grenade launcher fitted instead.

The GMG feeds from a single 48-round grenade belt, and has five additional belts to spare. The GMG can be zeroed up to a maximum distance of 1,800 metres instead (the distance increments remain the same as the HMG variant).

(*) The L7A2 GPMG on both variants feeds from a belt box that has 200 rounds worth of 7.62 mm ammunition. It has six more belt boxes left in reserve, for a total of 1,400 rounds combined.

Both variants of the Jackal have base armour values of 30.

The hull can only incur 20.1 points of damage.

The engine can survive 60 points of damage before failure. A damaged engine will prevent Jackals from being able to attain their top speed.

The fuel tank can only survive 30 points of damage before rupturing. A damaged tank will cause Jackals to gradually leak fuel over time.

Each of the four wheels can only take 15 points of damage. Destroying them will not affect the Jackal's "health" pool.

The gunner position controls the turret ring mounted primary weapon, while the commander position on both models (in the front-left seat) handles the forward-facing L7A2 GPMG medium machine gun:

NOTE: Only available on the Jackal 2 MWMIK (HMG) variant.

Heavy machine gun. Intended for use against infantry, unarmoured/lightly-armoured vehicles, as well as low-flying helicopters.

Unlike the static turret version of the same weapon, it can only attain a fire rate of 400 rounds per minute (though with the same muzzle velocity of 930 m/s). Accuracy-wise, it has a fixed dispersion of 0.001 rad at all ranges. It takes 6 seconds to reload a new belt box.

The gun itself can be swivelled freely in all directions horizontally, but is vertically restricted to a maximum elevation of 40 degrees and a depression angle of 25 degrees only.

NOTE: Only available on the Jackal 2 MWMIK (GMG) variant.

It fires grenades with high-explosive (HE) warheads and can attain a fire rate of 375 RPM with a muzzle velocity of 240 m/s. Dispersion is always fixed at 0.006 rad regardless of range. Reloading a new grenade belt takes up to 6 seconds to complete.

Like the L111A1, the gun has the same unlimited horizontal rotation arc but is limited to an elevation and depression angle (vertically) of 40 and 25 degrees, respectively.

The L7A2 GPMG serves as the Jackal's auxiliary weapon and is exclusively controlled by the commander position.

It can attain a fire rate of up to 800 RPM and requires 5 seconds to reload a fresh belt/cloth pouch. Accuracy-wise, it has a fixed dispersion of 0.0012 rad regardless of distance.

The gun itself has no optical sights attached. It can be swivelled up to a maximum of 35 and 45 degrees (left/right) horizontally. Vertically, elevation is limited to 40 degrees and a depression of 18 degrees.