Designed to replace the previous older Willys MB in use throughout the U.S. Armed Forces, the Jeep uses the same basic layout and dimensions of its predecessor but has a greater payload capacity and overall improved handling.

Features
It is available in two more variants aside from the baseline troop carrier: an armed scout that has a .50 cal heavy machine gun turret attached to the rear, and a unarmed civil variant designed for law enforcement use.

A multi-role 4x4 platform, the Jeep is highly versatile and makes for an excellent scouting/troop transport vehicle. Unlike the Soviet UAZ and its bulkier cousin, the HMMWV, the Jeep is one of the fastest ground vehicles available and can quickly outperform its rivals in almost every aspect.

It is also notable for being the only vehicle in its class that has an armed sub-variant, which makes it useful as an armed scouting vehicle as well.

Mobility
One of the fastest ground vehicles in Cold War Assault, the Jeep is capable of reaching a maximum speed limit of 100 km/h depending on the terrain.

It generally has decent handling even while going off-road, but caution should be advised as the Jeep is (to put it simply) extremely prone to rollovers at high speeds or when driving on bumpy terrain.

Drawbacks
Like its Soviet counterpart, the Jeep lacks overhead cover (the tarpaulin cover does not provide ballistic protection) for its passengers and crew which leaves all of its riders equally vulnerable to being injured or outright killed by enemy fire.

In addition, its fuel consumption rate is significantly much higher than the former's. After approximately twenty kilometres of travel, its tank will be almost depleted. Furthermore, it is more vulnerable to vehicle collisions as crashing into an object or other vehicles even at moderately fast speeds will result in severe - if not fatal, injuries to both the driver and passenger.

Crew Capacity
All Jeep variants have at least two seats for the driver and a single passenger who sits beside them in the front. Depending on whether it is armed or not, it may also have extra seats for additional passengers or a rear gunner. 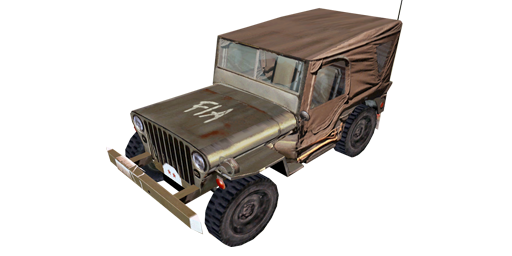 The top of the vehicle is covered by a tarpaulin but does not protect them from gunfire. Can transport up to three passengers, with one sitting in the front-right seat and two more in the rear.

The non-military variant on the other hand, features a different body that is completely covered by a canvas tarpaulin and has FIA initials spraypainted onto the hood. It has a slightly lower speed and acceleration but remains otherwise functionally identical to U.S. military Jeeps. 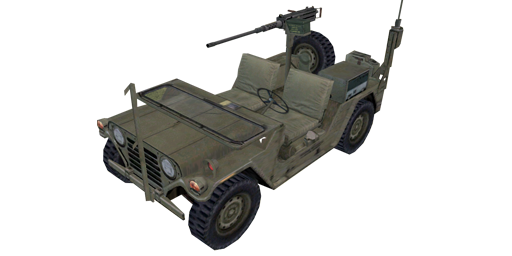 Identical to the baseline variant in terms of performance but has the rear two seats replaced with a .50 cal HMG instead. The HMG feeds from a single 500-round linked belt but cannot be reloaded without a supply truck to do so.

It can only transport a single passenger. 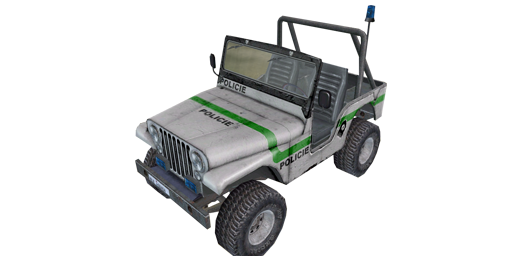 Has completely identical passenger capacity and performance statistics as the baseline model. The main difference is that it has less armour than the U.S. military Jeep, which makes it even more vulnerable to small arms fire.

This variant is only used by Nogovan police officers.

All variants of the Jeep have 20 points worth of armour plating.

The gunner on the armed variant operates the rear-mounted M2 heavy machine gun:

It can attain a fire rate of up to 600 rounds per minute and has a muzzle velocity of 1,000 m/s. Accuracy-wise, it has a dispersion value of 0.0006 rad regardless of range.