Employed as a journalist for the AAN News network, Harris was an experienced veteran of the organisation and was closely reporting on the on-going situation in Takistan following the UN-mandated intervention into the country.

The change was prompted after a series of controversial incidents involving several of the company's contractors in Chernarus as well as throughout the globe from Tajikistan to the Aleutian Islands.

Harris continued to follow developments on the PMC's subsequent rebranding to ION Services, Incorporated. As regional tensions in neighbouring Takistan increased over the course of the next two years, Harris would report on the progress of ongoing investigations by UN weapons inspectors.

He was present at the capital Takmyr when U.S. Army forces from Task Force Knight invaded via the coast during the early hours of the morning.

Following the success of the invasion, Harris continued to report on the movements of coalition forces as they proceeded to advance west and northward towards the Takistani Army and militia-held regions of the country.

The Loy Manara airbase in central Takistan was eventually captured by U.S. forces, and Harris; along with several other Non-Government Organisation aid workers, were ferried in via cargo plane to the newly secured outpost.

While on its final landing approach however, the plane is struck by surface-to-air missiles fired by unknown enemies and is brought crashing down into the militia-held valleys north of the airbase.

U.S. forces raced to reach the crash site in hope of finding survivors, but are informed by anti-militia/government rebels who had arrived first at the site that Harris and the others were already captured and taken away to another location by Takistani Army troops.

After a frantic search by coalition forces, they receive actionable intelligence that Harris and the others were taken away to an old coltan mine near the small city of Feruz Abad. The task force quickly assemble and assault the mine and surrounding area.

Unforunately, Harris' corpse is later discovered by a Delta Force fireteam led by Terry Graves while they were searching the mine, with the other hostages nowhere in sight.

Harris is mentioned by Colonel Kane in the press conference following the success of Operation Arrowhead, and in subsequent AAN News reports over his passing. A journalism award for "Human Interest Writing" is also named in his legacy.

He had a short, dark head of hair, and wore a t-shirt with the "Free Tibet" slogan emblazoned on it. The rest of his apparel consisted of a simple brown leather Press vest and faded blue jeans. 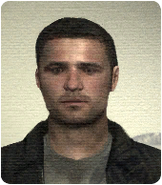 Harris' profile mugshot as seen in the briefing for Coltan Blues.