The KSVK is a 12.7 mm anti-materiel sniper rifle featured in both ArmA: Armed Assault and ArmA 2. 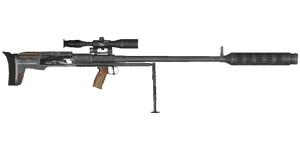 The KSVK is used exclusively by the SLA in ArmA: Armed Assault.

The KSVK is a bolt-action, bullpup anti-materiel rifle that is chambered to fire the 12.7×108 mm round.

It loads from 5-round box magazines and has a maximum fire rate of only 30 rounds per minute, with a muzzle velocity of 850 m/s. The KSVK is always fitted with the PSO telescopic sight and has an integrated (non-functional) bipod but cannot be suppressed.

Essentially the Russian counterpart to the American M107, the KSVK is an anti-materiel rifle that can tear through both armoured infantry and light vehicles alike. Its 12.7 mm round is able to kill any infantry target in a single shot regardless of where they are hit.

Though it usually has an effective range of just up to 1,100 metres, it is entirely possible to land hits as far away as 1,600 metres depending on the user's skill (the PSO's ballistic compensation markers are only accurate up to 1,100 metres).

At the same time, however, the KSVK also suffers from several design problems; chiefly, its magazine stores fove less rounds than its American counterpart. The second stems from its bolt-action operation; since the user needs to manually rack the bolt after shot (which imposes a forced delay of 2 seconds between rounds) it causes the KSVK to have a very low rate of fire.

Ultimately, this means that it is barely capable of reaching even a quarter of M107's fire rate. Contrast this with the M107 which is semi-automatic, and has a maximum fire rate of 120 rounds per minute versus the KSVK's meagre 30 RPM.

The KSVK can only load one type of magazine. It requires one free inventory slot to carry: 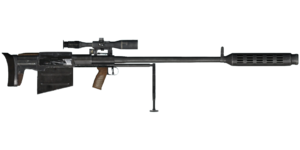 The KSVK is used by both the Russian Armed Forces and the Takistani Army, as well as in limited numbers with ION PMC contractors in ArmA 2.

Returning from ArmA 2, the KSVK remains virtually unchanged from its Armed Assault predecessor.

It still loads from 5-round box magazines and has both an identical muzzle velocity and rate of fire.

The KSVK still uses a PSO telescopic sight and features an integrated (non-functional) bipod, but cannot be suppressed or be fitted with laser pointers/flashlights. The KSVK cannot have its zeroing adjusted.

Now serving as the primary AMR of both Russian and Takistani snipers, the KSVK has not been changed in the slightest and still functions as it did in Armed Assault. It retains a consistent one-shot kill capability regardless of where the bullet impacts due to its powerful 12.7 mm round.

As a result it still shares the same downsides of the Armed Assault KSVK, but this is now further compounded by its lack of variety when it comes to optics. Unlike the American M107 which has the option of selecting between regular magnified optics and thermal-enabled scopes, the KSVK is restricted to using just the PSO-1 which has a fixed magnification and cannot be zoomed in.

The KSVK can only load one type of magazine. It requires one free inventory slot to carry:

Box magazine loaded with five 12.7 mm rounds. Does not contain any visible tracers.