The Ka-60 is a light utility helicopter used exclusively by ION PMCs in ArmA 2. It was added with the release of the Private Military Company DLC.

The Ka-60 is a four-bladed, rotary-wing light helicopter with a fantail that is primarily designed for airborne escort duties and to transport V.I.Ps.

Features
It is available in two variants that are always armed; the first (standard) variant is fitted with twin forward-facing 57 mm rocket pods that are attached onto stub wings. The second armed variant has the same rocket pods, but has a 40 mm grenade launcher mounted onto a pintle attached to the right side door.

The S-5 rocket pods on both variants can fire up to 14 rockets, while the M32 GL is pre-loaded with one 6-round cylinder of 40 mm high-explosive (HE) grenades, and has another nine cylinders in reserve (for a total of 60 grenades).

Originally intended for military use, the Ka-60 serves as the preferred choice of transport for private military companies such as ION thanks to its combination of a compact and nimble airframe.

Mobility
It is quite capable of reaching airspeeds exceeding 290 km/h with ease (under optimal circumstances) and is highly agile compared to heavier helicopters like the Mi-8.

Drawbacks
Consequently however, the Ka-60 lacks any kind of defensive avionics or the ability to deploy aircraft countermeasures, which renders it completely helpless to anti-aircraft missiles. It is also fairly soft-skinned, and is even more vulnerable to small arms fire than the UH-1H utilised by the Takistani Army.

Crew Capacity
It has a transportation capacity of eight passengers aside from the crew, who sit in the enclosed central cabin. The Ka-60 has a total of ten seats when the pilot and the co-pilot are taken into account, including the gunner for the GL-armed variant (who is treated as the eighth passenger). 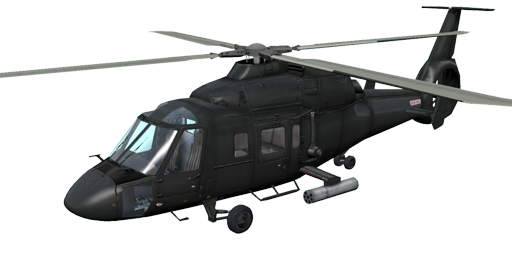 It is always armed with twin 57 mm rocket pods, and can transport up to eight passengers. The rocket pods contain 14 rockets and are fired in pairs. 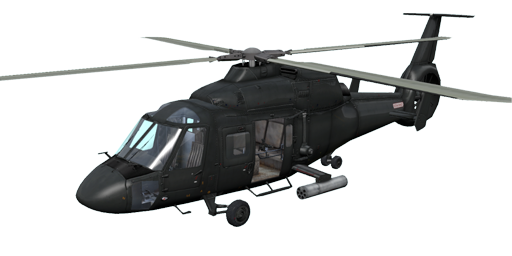 Identical to the baseline version but also has a 40 mm grenade launcher mounted onto a pintle fitted to the right side door.

Although it's technically capable of transporting up to eight passengers like the baseline model, the gunner takes up the eighth passenger seat, meaning that only seven passengers can be transported at a time.

On both variants, the pilot exclusively maintains controls over the S-5 rocket pods. For the M32-equipped model, the side gunner handles the door-mounted M32 grenade launcher:

Rockets are always fired in pairs. The pods have a firing delay of 0.08 seconds in-between volleys (750 rounds per minute) and are launched with an initial velocity of 44 m/s. They take a further 1.1 seconds to reach a top speed of 580 m/s in mid-flight.

The warheads are high-explosive (HE) based and have a blast radius of 12 metres.

It can attain a fire rate of up to 120 RPM with a muzzle velocity of 80 m/s. Accuracy-wise, the M32 has a dispersion of 0.007 rad at distances of up to 450 metres way. It takes 3 seconds for the gunner to reload another cylinder upon depletion.

Zeroing is possible starting at a minimum of 50 m up to 375 m. Adjustments are initially made with increments of 50 m but beyond 300 m, it rises in 25 m increments instead.

The Ka-60 does not have a Missile Approach Warning System and will not warn the pilot of incoming missiles already in mid-flight.

The Ka-60 does not possess a Radar Warning Receiver and cannot alert the pilot of being locked-onto by radar-based targeting systems.

The Ka-60 lacks an Infrared Warning Receiver, and will not warn the pilot of being targeted by infrared-based weapon systems.