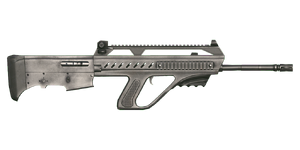 The Katiba is a 6.5 mm bullpup assault rifle used by both Mediterranean CSAT forces and in limited numbers with the Tanoan Gendarmerie in ArmA 3.

The Katiba is a gas operated bullpup assault rifle chambered to fire the caseless 6.5×39 mm round.

It loads from 30-round box magazines, and can attain a rate of fire of up to 800 rounds per minute with a muzzle velocity of 900 m/s. The Katiba accepts accessories on its top and side rails and can also be fitted with muzzle attachments, though it is unable to support bipods.

Compared to its NATO counterpart, it has less recoil and a greater fire rate (800 RPM versus the MX's 625). It also has a slightly shorter barrel length, which makes it compact to carry and less of a hindrance in close quarters. However, it should be noted that like its Pacific CSAT counterpart, the Katiba has noticeably higher dispersion at distances beyond 400-500 metres.

Because of its bullpup layout, it also requires one whole additional second to rearm compared to the MX. Lastly, it lacks access to extended capacity magazines and is always restricted to 30-rounders; a limitation which its American and Chinese-made counterparts do not share.

In spite of these downsides, the baseline Katiba nonetheless remains easier to handle compared to the MX. Firing rapidly on semi or full auto - whether in close quarters or against targets 300 metres away, is entirely feasible due to its (relatively) controllable recoil. 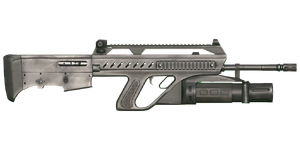 The Katiba GL is simply a modified version of the baseline Katiba fitted with an underbarrel grenade launcher.

It is chambered to fire the same caseless 6.5×39 mm round while the grenade launcher is designed to load 40 mm grenades, ranging from high-explosive (HE) grenades, to less-than-lethal (LTL) flares and non-lethal smoke shells.

Exclusively wielded by Mediterranean CSAT grenadiers and other specialist infantry classes, it loads from the same 30-round box magazines and is statistically identical to the baseline Katiba.

The underbarrel EGLM grenade launcher uses a red dot quadrant sight which can be zeroed to launch grenades at ranges of up to 400 m.

Aside from the underbarrel GL which slightly increases the weapon's inertia and weight, the Katiba GL's recoil and accuracy remains unchanged. 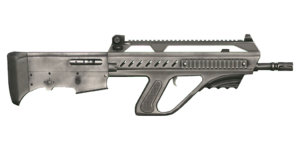 The Katiba Carbine is a compact variant of the baseline rifle. Performance-wise, it has the same rate of fire (800 RPM) and still loads from 30-round box magazines. The sole difference is that it uses a shorter barrel which reduces its muzzle velocity to 820 m/s.

This decreases its total weight and makes it more compact to carry - ideal for vehicle crewmen, mounted police officers and close quarters.

However, this comes at the cost of some accuracy and range; the latter limiting the Katiba Carbine's effective range to just under 350 metres and less.

All variants of the Katiba support being loaded with two types of magazines. Both weigh exactly the same with a "mass" of 10 units.

30 rounds worth of visible green tracers.