The Kozlice is a 12G shotgun featured in both ArmA: Cold War Assault and ArmA 3. 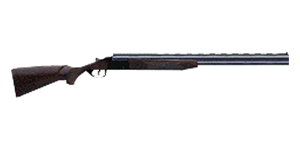 The Kozlice is used by civilian hunters and the Nogovan Partisans in ArmA: Cold War Assault.

The Kozlice is a double-barrelled shotgun that is chambered to fire 12 Gauge shotgun shells.

It can load either 12 Gauge balls or shells, and has a very low fire rate of just 14 rounds per minute.

The Kozlice's dual barrel design allows it to load two types of munitions simultaneously in the form of balls and shells. Each have round has different characteristics when fired; shells act more in the traditional manner of a shotgun and can disperse up to seven pellets per shot. Balls on the other hand, use a more basic ballistic model and fire in a direct arc instead.

However, because each ball/shell "magazine" actually occupies a single inventory slot, the shooter is restricted to carrying just ten rounds of spare munitions at a time for the Kozlice. In addition, neither balls nor shells are particularly accurate for shooting at any range beyond 150 metres. In retrospect, all these negative traits make the Kozlice basically useless for actual combat and should only ever be used as a last resort.

The Kozlice can load two types of shells. Both require one inventory slot apiece and are single shot only: 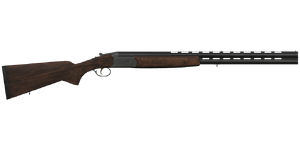 The Kozlice is used by civilian hunters, criminals and L'Ensemble fighters in ArmA 3. It was added with the release of the Contact DLC.

Returning from Cold War Assault, the Kozlice once again serves as a simple 12 Gauge shotgun favoured by civilian wildlife hunters and criminals alike.

It loads exclusively from 2-round shotshells designed for the Kozlice (either pellet- or slug-based) and retains a variable muzzle velocity of either 418 or 495 m/s depending on the type of shell loaded. The Kozlice cannot be fitted with accessories or attachments of any sort.

The Kozlice has changed little from its Cold War-era predecessor and continues to remain as a deadly firearm in the right hands. In close quarters, one volley from the Kozlice (when loaded with armour-piercing slugs) can incapacitate or outright kill the toughest of body armour-wearing infantry targets.

Altogether, the Kozlice can be best described as a "hand cannon". Regardless of pellets or slugs, anyone caught within the sights of a Kozlice user are guaranteed to suffer heavy damage no matter where the shells hit them.

However, the Kozlice is not without its drawbacks. While extremely powerful in close quarters, the Kozlice is severely hampered by its operation; its limited shell capacity will force the user to reload immediately after their first attack. Worse yet, the entire rearming process takes a lengthy six full seconds to complete.

Apart from sentimental reasons, the Kozlice is completely redundant for any combat situation - as one would expect of a relic from the 20th century. 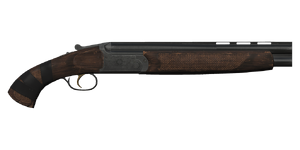 A sub-variant with the stock sawed-off and a shorter barrel, these modifications reduce almost half of the Kozlice's stamina and inertia burden.

This particular model can be stowed away inside a backpack or even the user's vest, allowing one to bring along a powerful compact shotgun onto any mission.

However, the Sawn-off model has a drastically reduced muzzle velocity regardless of the type of shotshell loaded (304 m/s for pellets and 360 m/s for slugs). Its dispersion is significantly increased and has even less range than full-length Kozlice shotguns.

The Kozlice can load two types of "magazines". Both have identical "mass" values of 6:

Upon firing, a total of eighteen pellets will be dispersed in a pattern arranged by Poisson disc sampling within a 0.8 degree cone.

Looter armed with the sawed-off variant.