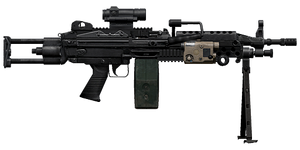 The L110A1 is a 5.56 mm light machine gun used exclusively by British Army troopers in ArmA 2. It was added with the release of the British Armed Forces DLC.

It feeds from 200-round linked belts stored in plastic boxes, and can attain a rate of fire of up to 910 rounds per minute with a muzzle velocity of 915 m/s. The L110A1 is fitted with a laser pointer and CCO red dot sight by default.

Essentially the British Army's equivalent of the M249 SAW used by U.S. forces, the L110A1 is a light machine gun that packs the firepower of 200 rounds of 5.56 mm ammunition in a compact package.

With a fairly high base rate of fire, the L110A1 can provide sustained cover fire and be used to accurately suppress targets at ranges of 300 and up to 600 metres away.

Like the M249 however, the L110A1 is neither as powerful as dedicated medium machine guns such as the M240 or the L7A2 due to firing 5.56 mm as opposed to 7.62 mm, nor is it capable of reaching targets located as far out as the former two. It is best utilised in its intended role as a light support weapon for use in close-medium ranged engagements, rather than being treated as an MMG.

There are six kinds of "magazine" varieties that the L110A1 can feed from. The 200- and 100-round linked belts take up two inventory slots apiece, while the individual rifle magazines only require one slot:

Standard 200-round linked belt stored inside a plastic box, specifically designed for use with the L110A1. Rounds fired from this box have a muzzle velocity of 915 m/s.

The fourth round will always be a red tracer, while the last four rounds consist exclusively of tracers.

100-round linked belt stored inside a soft pack. Remains otherwise identical to regular 200-round plastic boxes.

Basic 30-round rifle magazine. Rounds fired have a muzzle velocity of 930 m/s.