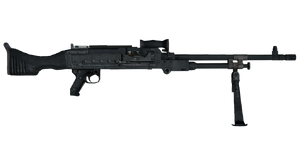 The L7A2 GPMG is a 7.62 mm general-purpose machine gun used exclusively by the British Army in ArmA 2. It was added with the release of the British Armed Forces DLC.

The L7A2 is a gas operated medium machine gun that uses an open bolt design. It is chambered to fire the 7.62×51 mm NATO cartridge.

It loads from 100-round belt cloth boxes, is able to achieve a fire rate of up to 846 rounds per minute with a muzzle velocity of 900 m/s. The L7A2 does not come in any variant that has either optical sights, muzzle attachments or side rail accessories mounted. It has a maximum zeroing range of up to 1,400 metres.

The L7A2 serves as the British Army's standard issue GPMG. Virtually identical to the M240 utilised by their American allies, the L7A2 is a powerful medium machine gun that has an effective range of between 800 and up to 1,200 metres.

It is exceptionally good at providing medium-long range suppressive fire and unlike its Russian-made PKP/PKM counterparts, has a much higher rate of fire and easier to manage recoil. Like the M240, it is also utilised as a vehicle-mounted weapon on some ground vehicles; the Jackal 2 MWMIK being one such example, which has the L7A2 fitted as a forward-facing weapon for the vehicle commander.

As with the M240, the L7A2 is chambered to fire the same 7.62 mm NATO round which is what gives it a high damage output compared to the (relatively) smaller 5.56 mm-chambered L110A1. The L7A2 is effective against both infantry and light vehicles alike, and is capable of downing an enemy soldier with only one shot to the chest at almost every range.

But like all GPMGs, the L7A2 is almost uncontrollable while the operator is firing while standing up due to its excessive muzzle climb and recoil. For optimal results, using short bursts of just 2-5 rounds or simply lying prone, will allow the user to mitigate the effects of both and can therefore make the L7A2 more slightly easier to handle.

The L7A2 Minitripod is a static defence version of the L7A2.

It is mounted onto a low tripod and is completely identical to the man-portable counterpart, save that it has a lower fire rate of just 750 rounds per minute.

This variant always comes pre-loaded with a single 200-round belt box of 7.62 mm ammunition, and has a further three more boxes spare for a total of 800 rounds.

The tripod can be swivelled 60 degrees in both directions (horizontally).

The non-static L7A2 is limited to feeding from one type of "magazine". It requires two free inventory slots to carry:

100-round linked belt stored in a clothed box. Also shared with the M240.