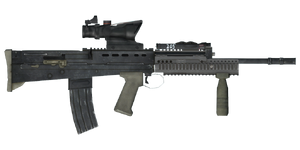 The L85A2 is a 5.56 mm bullpup assault rifle used exclusively by the British Army in ArmA 2. It was added with the release of the British Armed Forces DLC.

The L85A2 is a gas operated, selective-fire bullpup assault rifle that is chambered to fire 5.56×45 mm NATO ammunition.

It loads from 30-round STANAG magazines, and is able to achieve a fire rate of up to 705 rounds per minute with a muzzle velocity of 930 m/s. The L85A2 has a large choice of sub-variants fitted with various optical sights and side rail accessories, ranging from HWS holographic sights, SUSAT and ACOG riflescopes, as well as laser pointers and AWS thermal scopes. There are no variants that have sound suppressors attached to the muzzle.

A versatile assault rifle, the L85A2 uses a bullpup configuration and combines a decent fire rate with minimal recoil.

It has an effective firing range of between 250-450 metres. Its accuracy is on par with the U.S. Army's Mk16, and when paired with a riflescope like the ACOG or SUSAT, the L85A2 can be used to accurately hit targets at distances of approximately ~ 500 metres.

Its only real drawback is that no variants of the L85A2 can be suppressed. Unlike the M4A1 or the Mk16/Mk17, it lacks the ability to mount suppressors, meaning that an alternative must be sought if stealth is a priority. 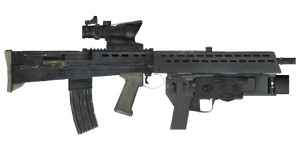 The L85A2 UGL is simply a modified variant of the baseline L85A2 rifle that configured to use an underbarrel grenade launcher.

It is identical to its parent weapon in all aspects and also has the same options when it comes to optical sights (aside from not being able to mount the AWS).

The only exception is its UGL module that is designed to launch 40 mm grenades. The UGL uses a conventional flip-up leaf sight that is accurate at distances of up to 300 metres.

For grenade rounds usable with the UGL, refer to its dedicated article here.

All variants of the L85A2 are restricted to three types of magazines. They occupy a maximum of one inventory slot each: