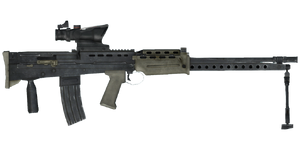 The L86A2 LSW (full name: Light Support Weapon) is a 5.56 mm marksman rifle exclusively used by the British Army in ArmA 2. It was added with the release of the British Armed Forces DLC.

The L86A2 LSW is a selective-fire, gas operated, bullpup marksman rifle that is chambered to fire the 5.56×45 mm NATO cartridge.

It loads from 30-round STANAG magazines like its parent assault rifle, and is able to attain a fire rate of up to 705 rounds per minute with a muzzle velocity of 930 m/s. It has a (non-functional) bipod, and is always fitted with an ACOG riflescope by default. The L86A2 is unable to mount any sound suppressors.

The L86A2 is a modified variant of the baseline L85A2 assault rifle. The overall layout of the L86A2 remains mostly the same as the L85A2 aside from using a longer barrel and folding bipod.

With regards to handling, the L86A2 has almost no difference to the L85A2 recoil-wise. The only main weakness is its longer barrel, which increases the user's inertia and inflicts a minor handling penalty in close quarters.

While the L86A2 works well as a medium-ranged marksman rifle, it suffers from the drawbacks faced by the American-made Mk12 SPR since it is chambered in 5.56 mm. 7.62 mm-chambered marksman rifles like the DMR or the Mk17 Sniper will always outperform the L86A2 not only in terms of stopping power, but also because they have a longer reach and better magnified optics.

The L86A2 is limited to loading just two types of magazines. They require one inventory slot to carry: