The LAV-25 is an air-deployable 8x8 amphibious armoured reconnaissance/personnel carrier designed to ferry troops to and from combat on contested shorelines.

Armament
It is armed with a single 25 mm autocannon that is accurate at ranges of up to 1,500 metres. The gunner can switch between firing either high-explosive or armour-piercing ammunition. The main gun is complemented with a coaxial 7.62 mm medium machine gun.

The standard loadout of the LAV-25 gives it 210 rounds of high-explosive (HE) explosive and 210 armour-piercing (AP) shells for the main gun, totalling 420 rounds when combined.

Features
Amphibious-capable and highly mobile, the LAV-25 is a prime example of the Marine Corps' focus on maintaining a high speed, low drag doctrine.

It is easy to handle, retains decent acceleration, and thanks to its 25 mm autocannon is able to provide fire support against most types of ground threats.

Drawbacks
The LAV-25 is not without weaknesses however, and suffers from several drawbacks which make it comparatively inferior to the BTR-90 in several respects. It has minimal armour plating, and a lack of dedicated anti-tank weaponry results in the crew being forced to fall back on its AP shells when tackling armoured threats.

However, the 25 mm AP shells are underpowered and cannot put much of a dent in the armour of most heavy vehicles; let alone Main Battle Tanks. To inflict damage, direct hits need to be scored against exposed or weaker sections of the vehicle (such as the engine or turret).

Crew Capacity
The LAV-25 has a seating capacity of nine personnel including the crew. The crew includes the driver, gunner and commander. The six passengers sit in the rear compartment just below the turret and enter via the rear hatches. 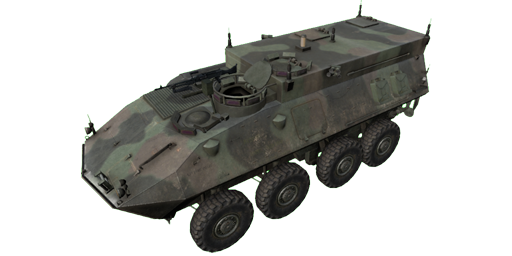 Stripped down version of the baseline LAV-25 with its turret removed.

The turret has been replaced with a single hatch in the front that is fitted with a fixed (but rotatable) M240 medium machine gun. The M240 is loaded with a single 100-round belt box and has a further four boxes in reserve for a combined total of 500 rounds.

This variant cannot transport any passengers and is restricted to carrying its driver and commander only, who doubles as the vehicle's gunner.

(*) The LAV-25 (HQ) is completely non-functional in normal gameplay, and serves only as a deployable command vehicle in Capture The Island (CTI) scenarios created with the Warfare module.

All variants of the LAV-25 retain base armour values of 150.

Note that with the exception of the turret, component hitzones remain identical on the LAV-25 (HQ) variant.

The hull can resist up to 150 points of damage.

The engine can survive 300 points of damage before failure. A damaged engine will prevent the LAV-25 from being able to attain its top speed.

Depending on tidal strength both variants may not be able to achieve sufficient power to traverse over water, and can potentially become trapped without mobility support from other vehicles.

The fuel tank can only incur 150 points of damage before rupturing. A damaged tank will cause the LAV-25 to gradually leak fuel over time.

The wheels on both LAV-25s can only take 60 points of damage before bursting. 40% of damage is always shared with the LAV-25's main "health" pool.

The turret on the regular troop carrier can only take 120 points of damage before failing. 30% of incoming damage is always transferred onto the vehicle's "health" pool.

Disabling this component will prevent the gunner from rotating the turret's rotation/elevation but will not stop it from being fired.

NOTE: For specifics on the M242's munitions, see its related section listed here.

The gunner position controls all weapon systems on the regular LAV-25 variant. On the HQ variant however, the commander position uses the external, turret ring-mounted M240.

For optics, only the baseline IFV variant's gunner can toggle a day, night or green-hot/black-hot thermal vision modes (the commander uses orange-hot/red-hot instead):

The M242 can attain a fire rate of up to 200 rounds per minute. It has an effective firing range of 1,500 metres. Switching munitions is not instantaneous, and requires 10 seconds to complete every time.

Dispersion is identical regardless of whether the M242 is firing HE or AP-based rounds, and is always fixed at 0.0003 rad. Rounds are fired in bursts of 5 unless the M242 is out of ammunition.

The M240 is mounted either coaxially (on the regular APC variant) or fitted onto an external turret ring (on the HQ variant).

It can attain a fire rate of up to 800 RPM and requires 5 seconds to reload a fresh belt/cloth pouch. Accuracy-wise, it has a fixed dispersion of 0.0012 rad regardless of distance.

Baseline LAV-25 variant. Note the empty pintle on top of the turret.