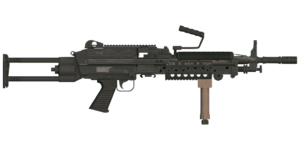 The LIM-85 is a 5.56 mm light machine gun used by several BLUFOR, REDFOR and INDFOR factions in ArmA 3. It was added with the release of the Apex DLC.

The LIM-85 is a belt fed, gas operated, selective-fire light machine gun that is chambered to fire the 5.56×45 mm NATO round.

It feeds from 200-round linked belts stored in plastic boxes, and has a variable rate of fire that ranges from 400 up to 800 rounds per minute (depending on fire mode) with a muzzle velocity of 915 m/s. The LIM-85 is capable of having accessories fitted to its top and side rails, and can also mount attachments onto its muzzle. It does not accept underbarrel accessories due to using an integral grippod.

Compared to the AAF's Mk200, the LIM-85's recoil is slightly more difficult to manage but retains higher accuracy that is on par with modern assault rifles such as the MX.

Despite not being chambered to fire caseless ammunition like the Mk200, the LIM-85's 200-round boxes are surprisingly much lighter to carry in comparison. This makes the LIM-85 a viable alternative for users who require the firepower of a light machine gun but wish to avoid the stamina burden of the Mk200 or CSAT's 7.62 mm-chambered Zafir.

Consequently, this does mean that the LIM-85's effective range to limited to under roughly ~ 580 metres and less. Beyond that distance, the 5.56 mm ammunition that it fires loses energy rapidly and suffers greatly from damage drop-off.

Needless to say, this drawback also extends to penetration. When pitted against heavier plate carriers or armoured fatigues, the LIM-85's penetration is subpar and will require many more rounds to put down such targets.

The LIM-85 supports being loaded with four types of belt boxes. All contain 200 rounds and weigh the same with a "mass" of 40 units:

Fires one yellow-coloured tracer every four rounds. Only the last four rounds will consist exclusively of tracers.

Identical to regular 200-round belt boxes, but fires red-coloured tracer ammunition instead.

Contains a full 200-round load of visible yellow tracers.

It is otherwise identical to regular 200-round belt boxes.

Identical to 200-round yellow tracer belt boxes, but fires red-coloured tracers instead.