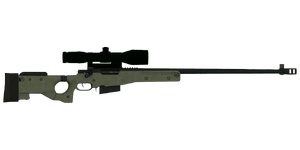 The LRR (full name: Long Range Rifle) is a .338 sniper rifle used exclusively by the British Army in ArmA 2. It was added with the release of the British Armed Forces DLC.

The LRR is a bolt-action sniper rifle that is chambered to fire the .338 Lapua Magnum round.

It loads from 5-round box magazines, and is limited to a maximum fire rate of up to 30 rounds per minute only with a muzzle velocity of 936 m/s. The LRR is always fitted with a magnified riflescope that has a magnification strength range of 3x-12x. It can be zeroed up to a maximum distance of 1,400 metres.

The LRR is essentially the British counterpart to the U.S. military's M24. Both have the same magazine capacity, range, and stopping power (though the .338 round is slightly better at longer distances).

Accurate and powerful, it is arguably one of the best infantry weapons in ArmA 2 after heavier 12.7 mm sniper rifles like the AS50. Its scope has two zoom settings, making the weapon ideal for marksman and sniper roles alike.

The main drawbacks of the LRR stem from its meagre 5-round magazine capacity, which is quite small compared to the 20-round 7.62 mm magazines of the (albeit less powerful) DMR or M110 rifles.

Consequently, this makes it somewhat difficult to use as a marksman rifle due to the constant need to reload - a significant issue at medium/close ranges. Unlike the M110, it also lacks any sub-variants fitted with night-fighting optics. Lastly as a bolt-action weapon, it suffers from a mandatory two second delay between every shot.

Combined with its meagre ammunition capacity, every shot fired needs to hit its target. Fortunately, since the LRR's .338 round has such high stopping power, every round is almost always guaranteed to kill its target on the first hit, making follow-up shots generally unnecessary (except in very specific cases).

The LRR is limited to loading one magazine type. It only requires one inventory slot to carry: