Lane is an infantryman from the U.S. Army's contingent deployed to Livonia as part of NATO's Exercise Electron-39.

He serves as the designated marksman of his squad, and went by the radio callsign of Diamond 2-1.

With the Livonians having secured a victory in one round of exercises, Lane and the other members of the American contingent stood down and waited for their next mission to commence.

Unexpectedly however, one of Army's UCAVs accidentally drops a GPS-guided bomb right into the heart of the camp grounds, resulting in the deaths of seven Livonian soldiers and one American.

Electron-39 is immediately halted as an investigation is conducted into the incident with all U.S. forces (Lane included) forced to relocate to Camp Kresnik while Camp Konrad is to be dismantled.

On July 3rd, two weeks after the friendly fire incident, Exercise Electron-39 is officially cancelled with the entire Army contingent scheduled to withdraw from Livonia shortly. Lane and the other soldiers at Kresnik were growing weary of increasingly tense political situation.

His fears that the investigation's inability to tie Russian interference to the incident, would inevitably result in a diplomatic fallout between the U.S. and Livonian governments.

Not long before they can leave, a giant ship-like object covers the entire region discharges a powerful shockwave over the entire region. Any electronic equipment unshielded against the effects of the shockwave are immediately disabled, with the ship object stopping just above the factory grounds where the friendly fire incident first occured.

With the contingent's commanding officer killed by the shockwave, communications were frantic and mixed at best. Major Don Homewood took the reigns of leadership over all remaining NATO forces, and introduced theoretical physicists, Ian Kesson and Šimon Čapek to Lane and the others. They explained that the ship's origins were of extraterrestrial origins, and that humanity had just made contact with alien life.

Suddenly, the ship releases a smaller drone-like entity that flies in the direction of a forest at Point Hopi. Lane spots the sighting and reports its flight path back to Maj. Homewood, who ordered another scouting team at Hopi to attempt communications with the alien. Specialist Aiden Rudwell was dispatched to assist, but the plan immediately suffers a setback when the Specialist is apparently "attacked" by the drone, causing him to suffer a seizure and collapse to the ground.

Thinking that the entity was hostile to humans, Hopi's soldiers panickedly retaliated. The drone was unfazed by their attacks; it launched several powerful orbs at the team and annihilated them swiftly. Reaching the conclusion that the aliens were indeed hostile, Homewood and the Livonian commanders agreed to plan a counterattack against the ship. However, fellow soldier Corporal Jack Stype pulls out the explosive charges from their demining UAVs and threatens to blow up the camp if Homewood and the Livonians didn't back down. Lane agreed with Stype's assessment and together with Pvt. Baker, bickered with the Livonians over their refusal.

However, Maj. Homewood was having none of it and threatened to shoot Stype if he didn't back down. Panicking, Stype threw the charges at Homewood and detonated them, instantly killing the Major and destroying much of the camp simultaneously. Believing that Stype was leading a mutiny the Livonians opened fire, prompting Lane and the others to defend themselves.

With Homewood gone and several of the Livonian soldiers now dead at their hands, Lane and the remaining Americans at Kresnik were designated as renegades to be shot on sight. Stype rallied them together and set up a temporary camp at the base of an old radio tower. Lane climbed up the tower and scouted the surrounding areas. He spotted an abandoned truck parked nearby that could have valuable supplies, and saw several of the alien drones flying around the region.

In the meantime, SPC. Rudwell left the camp to go scouting while Lane and Stype attempted to find a source of transportation. Not long after, a team of unknown operatives stormed the camp and placed Dr. Kesson and the others in restraints. Lane and Stype succeeded in finding a vehicle but returned to the deserted camp, finding the others locked up inside the shed.

After being freed, they drove a fair distance away from the camp and decided to link up with Lieutenant John Kingsly's team, who were attempting to restart the radio tower and Lomnica to contact NATO command. However, the car was damaged and needed repairs. Kesson also wished to collect more data from the aliens, who had apparently established a subterranean network of "roots" all across the region. SPC. Rudwell would again go alone in search of the "roots" while Lane and others stayed behind to repair the vehicle.

Upon Rudwell's return, the vehicle's tyres still hadn't been replaced yet. Stype told Rudwell to go up ahead and meet up with Kingsly's team alone. Kingsly's team reactivated the tower, but one of the alien drones suddenly flies right above it and seemingly looks in the Specialist's direction. Lane's team raced up the hill but discovered Rudwell unconscious on the ground and the alien drone gone. Before they could even gather what had transpired, the same Russians that had locked up the others were now here at the station. Fortunately, they made it clear that they meant no harm to the Americans, and only wanted to explain the situation to them.

After Rudwell awakened from his slumber, the Specialist began conversing with Russian team leader, who identified himself as Captain Ivan Severov. Severov revealed that a similar situation involving objects left behind by "The Visitors" had occurred before, and that only massive destruction awaited the entire region if they did not protect the core at the factory.

Suddenly, Lane spotted a flight of Livonian jets passing overhead. They began to launch missiles at the alien mothership, followed by even more explosions in the distance. With no time to spare, Lane and the others agreed to Severov's plan and decided to protect the core from the Livonians. They split up into three groups: Lane would join Lt. Kingsly and the others to intercept LDF reinforcements, while Severov's Spetsnaz team would directly attack the factory. Finally, Rudwell would go alone to destroy the missile launchers that the Livonians were utilising to strike the ship.

Although they were clearly outnumbered, Lane's team momentarily succeeds in preventing several waves of Livonian reinforcements from getting through their blockade. However, the Livonians continued to apply pressure and their defensive line was broken. Unable to stop their advance any further, Lane's team retreated and informed Rudwell that they were falling back.

Luckily, Severov had called for backup and and the Russian Air Force responded in full force. Additional Spetsnaz paratroopers are flown in, and gunships blasted away incoming armour. Having suffered heavy losses, the Livonians abandoned their attack on the core. Now safe from further attacks, the Russians secured the factory grounds and began working on stabilising the heavily damaged core. Another helicopter soon arrived to collect Lane and the others.

Post-crisis, Lane and the other American survivors were airlifted out of the country to a secure Russian military base in the Kaliningrad Oblast. For safety reasons, they would spend up to forty days in quarantine but were treated well by the Russians for the entire duration of the stay.

Upon their release, Lane returned to the United States where he and the others would face a barrage of questions and media attention following humanity's first contact with alien life.

Lane is a Caucasian male with a messy brown-coloured head of hair. During training, he wears the standard attire of an Army marksman consisting of a Woodland-camouflage plate carrier vest, fatigues and a ballistic helmet. When not on duty, he prefers to don less formal attire and wears a lighter vest, t-shirt and patrol cap.

Young and impressionable, Lane is the kid of his squad. His inexperience is generally misconstrued as ignorance by his more senior teammates, once being mocked for his inability to grasp SPC. Rudwell's lessons on the Russian language.

However, he is the most concerned about the investigation of the Hopi Incident and their findings, fearing the consequences of the aftermath if Russian interference were to be ruled out. Despite this, Lane is shown to be quite proficient with electronics, as he was left responsible with the task of repairing Camp Kresnik's damaged systems.

Lane on the right, in his pre-crisis attire. 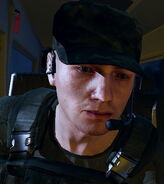