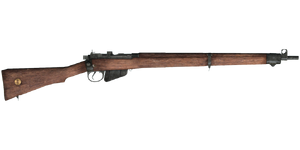 The Lee-Enfield is a .303 sniper rifle used in limited numbers by both Takistani anti-government rebels and pro-government militia groups in ArmA 2. It was added with the release of the Operation Arrowhead expansion pack.

The Lee-Enfield is a bolt-action rifle that is chambered to fire the .303 round.

It feeds from 10-round magazines and can only attain a maximum fire rate of up to 30 rounds per minute, along with a muzzle velocity of 750 m/s. The Lee-Enfield cannot be fitted with any optical sights or accessories, nor can it be suppressed. The rifle itself cannot be manually zeroed.

The Lee-Enfield is one of the many incarnations in its family of bolt-action rifles that have served the armed forces of many nations and non-state actors for more than a century. A relatively rugged weapon, the Lee-Enfield doubles both as a line weapon, as well as a sniper rifle (albeit one that lacks optics). It is accurate at ranges of between 300 and up to 600 metres.

Whilst it has its uses, because the Lee-Enfield relies on a bolt-action operation it fires extremely slowly and has a forced delay of two seconds between each shot. Any opponent armed with a submachine gun or carbine will easily cut down the Lee-Enfield's operator should they get close enough.

At the same time, dedicated sniper/marksman rifles like the SVD completely outmatch the Lee-Enfield when it comes to both range and fire rate. Not to mention being easier to use by virtue, simply because they have the advantage of magnified optical scopes.

Overall, the Lee-Enfield is an antiquated weapon that would be better served in a museum rather than on a modern battlefield. It's not a poor weapon by any measure of standard, and still makes for a decent rifle to fall back on if there are no alternatives that can be obtained. But its obsoleteness in contemporary warfare will show when pitted up against other sniper weapons in its class.

The Lee-Enfield is limited to loading from only one type of magazine. It requires one inventory slot to carry:

10-round magazine. Does not contain any visible tracers.

Republican militiaman armed with the Lee-Enfield.