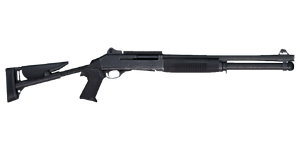 The M1014 is a semi-automatic combat shotgun that is chambered to fire 12 Gauge shotgun shells.

It can load either 8-round pellet or slug shell magazines, has a maximum fire rate of up to 120 rounds per minute, and a muzzle velocity of 396 m/s. The M1014 lacks the ability to mount any accessories or muzzle attachments.

The M1014 is a high-powered combat shotgun used by the U.S. military. It has an effective range of between 40 and up to 250 metres, though it's best employed for close quarters combat situations only.

Both the M1014 and its Russian counterpart are roughly comparable to one another. Their recoil, ammunition capacity and dispersion are almost identical. The main difference with the M1014 is that its fire rate is far lower in comparison to the Saiga 12K.

The M1014's sole saving grace are its ghost ring sights, which are more ergonomic to aim with compared to the cumbersome ironsights found on the Saiga 12K.

The M1014 can load two types of magazines. Both require one inventory slot to carry: 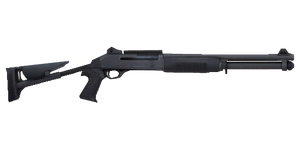 The M1014 is used exclusively by the Operators in ArmA Tactics.

A powerful weapon in close quarters, the M1014 is capable of one-shotting enemies regardless of whether they score a critical strike. The user can swiftly take out two enemies in a single turn without the need to reload or rely on another Operator to finish off the targets for them.

However, it should be noted that the M1014 has one major drawback to its use: range. Unlike the M4A1 or even the M249, both hit probability and damage drop off sharply against targets that are just a few metres away from the Operator. Ironically, it is the inverse of the M110 (the latter being terrible at close ranges); it is possible to waste all four shots on a single target and barely reduce them to half health.

To make matters worse, the M1014 is the sole primary weapon which can't be upgraded. With no method of increasing its magazine capacity, the ability to mount a suppressor or accessory to boost its range, the M1014 is redundant for missions where firefights occur over long distances.

Luckily, the M1014's main upside stems from the fact that it doesn't require skill points invested into shotguns to be powerful. As such, any member of the team can be chosen as a candidate for the M1014 immediately upon purchase - as long as the mission takes place exclusively in close quarters. If the mission does not have close range encounters, it is always better to exchange the M1014 for the M249.