The M113 is a highly versatile APC that can be adapted for a variety of combat and non-combat roles.

It is the most widely produced armoured transport in the world, with the baseline model and its variants in service with over fifty countries globally.

The baseline armed variant's HMG is loaded with a single 500 round belt box of .50 cal ammunition, while the unarmed ambulance variant can heal injured ground troops.

The M113 served as the primary APC utilised by U.S. forces operating on Malden at the height of the Cold War.

Amphibious-capable, compact, and fairly speedy for a vehicle of its size, the M113 is an integral part of mechanised U.S. infantry formations, and serves as a smaller counterpart to the bulkier Bradley Infantry Fighting Vehicle.

Notable Traits
While it lacks the armament of the Bradley or even the Soviet BMP-1, the M113 makes up for it by being able to transport one additional soldier in its passenger compartment.

It also has two more variants dedicated to either supporting wounded troops in the field, or for defending Main Battle Tank formations against low-flying fixed and rotary-wing aircraft.

Drawbacks
In the case of the Vulcan variant, it is quite lacklustre in terms of performance (at least compared to the Soviet Shilka) when it comes to tackling helicopters, mostly due to being much shorter ranged and weaker firepower-wise.

It is still however, arguably more effective than the FIM-92 Stinger when it comes to dealing with large numbers of helicopters.

Care should always be taken when driving the M113 into areas where AT threats are expected, since all variants of the M113 are quite fragile. A single rocket from the RPG-75NH is usually sufficient to render one disabled, if not outright destroyed.

Crew Capacity
Depending on the variant, M113s support at least the driver and additionally, a gunner. Passenger capacity varies depending on the model but the regular M113 provides enough seats for at least eight passengers at a time. 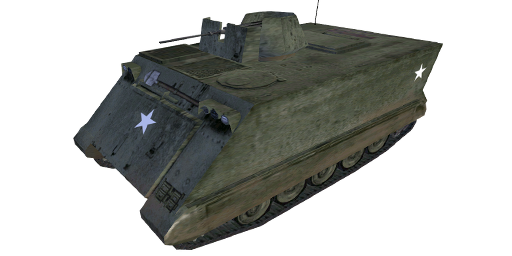 Its chassis forms the basis upon which all other M113 sub-variants are based on. It can transport up to eight passengers, and has a crew that consists of the driver and the gunner who sits in a cupola turret fitted to the roof of the vehicle. 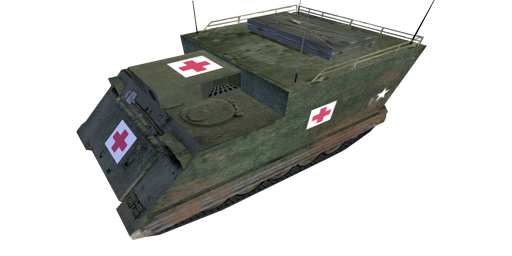 Its rear compartment has litters with enough space for up to three wounded soldiers (not including the driver). Unlike the baseline variant, this model does not have a gunner and is completely unarmed. 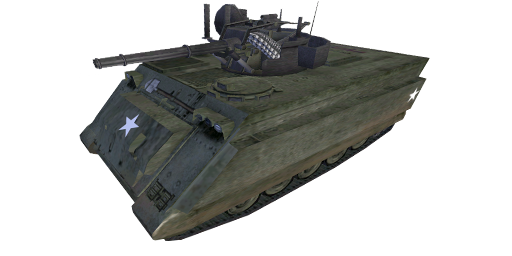 It is mostly identical to the baseline troop carrier but exchanges the .50 HMG for a 20 mm Gatling cannon instead.

The M113 Vulcan's cannon feeds from a single belt with 2,000 rounds of 20 mm ammunition. It cannot transport any passengers in its rear compartment, and only has enough room for the gunner and driver.

All variants of the M113 have 150 points worth of armour plating.

The gunner handles either the M2 or Vulcan weapons mounted onto the roof turret cupola (depending on variant):

NOTE: Only available on the baseline M113 variant.

It can attain a fire rate of up to 600 rounds per minute and has a muzzle velocity of 1,000 m/s. Accuracy-wise, it always has a fixed dispersion of 0.0007 rad regardless of distance.

NOTE: Only available on the M113 Vulcan variant.

The M113 is used by both the U.S. Army and RACS military forces in ArmA: Armed Assault.

Little has changed between the Armed Assault M113 and its predecessor in Cold War Assault, save that it is now used by independent RACS mechanised units in addition to U.S. Army forces.

Features
It is still available in three configurations: the baseline armed troop carrier, an anti-aircraft SHORAD model, as well as an unarmed mobile ambulance.

The regular troop carrier is now able to transport three additional passengers on top of the usual eight, giving it a total passenger capacity of eleven instead.

In all other aspects, the M113 in Armed Assault has not been changed in the slightest.

Drawbacks
All models of the M113 still retain very little armour plating, meaning that the Armed Assault M113 provides virtually no protection for its passengers against dedicated anti-vehicle weaponry.

While it can withstand small arms fire from calibres up to (and including) 7.62 mm, the M113 itself will not survive being hit by anti-tank munitions or land mines.

Crew Capacity
Armed variants of the M113 provide enough seats for both the driver and a gunner. Only the baseline troop carrier model can transport up to eleven passengers at a time. 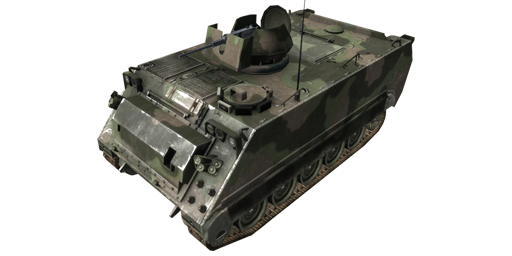 It is armed with a .50 cal heavy machine gun fitted to the roof of the APC, with the gunner covered by a bullet-resistant cupola and forward-facing gunshield.

The M2 HMG is pre-loaded with a single 100-round belt box and carries a further three more boxes spare (for a combined total of 400 rounds). It can transport up to eleven passengers at a time. 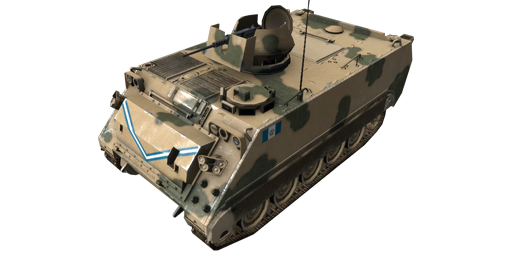 Identical to the baseline M113 model and is exclusive to the RACS faction.

It is functionally identical to the baseline troop carrier except for its camouflage scheme. 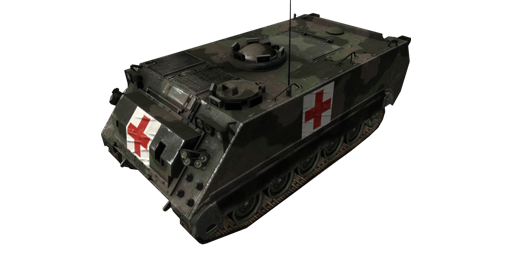 Medical support/transport variant. It lacks armament but can heal nearby injured infantry. Besides the driver, three more passengers can be carried in the rear on litters.

This variant cannot store any spare magazines or weapons in its inventory. 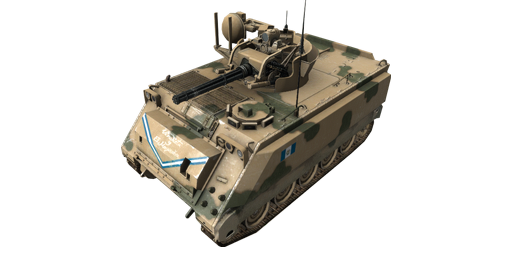 It is mostly identical to the baseline troop carrier, except that it cannot transport passengers and has its HMG turret replaced with a 20 mm gatling cannon. The M168 cannon feeds from a single 2,100-round linked belt and has no further spare belts in reserve.

It is unable to transport any passengers.

The hull on all variants can survive 105 points of damage.

The engines can only incur 36.75 points of damage before failing.

Both tracks on all variants can withstand only 15.75 points of damage before breaking.

The turrets on the armed variants are able to incur up to 105 points of damage.

All weapons are exclusively controlled by the M113's gunner, who sits inside an armoured cupola mounted atop the vehicle's roof:

NOTE: Only available on the baseline M113 and M113 (RACS) variants.

NOTE: Only available on the M113 Vulcan variant.

The M113 is used by several OPFOR and Independent factions in ArmA 2. It was added with the release of the Operation Arrowhead expansion pack.

The ArmA 2 M113 family remains largely unchanged from Armed Assault, though it is no longer used in bulk by U.S. forces and lacks the Vulcan variant featured in previous titles.

Armament
The troop carrier is armed with a .50 cal HMG fitted with a gunshield that feeds from a single belt box of 100 rounds worth of .50 cal ammunition, and has another three boxes spare.

It is attached to the roof of the M113, with the gunner manning it from a cupola designed to protect them from small arms fire.

Features
It is available in two variants, the baseline armed troop carrier model and a (unarmed) mobile ambulance model that can heal wounded troops. Both are amphibious, and are capable of fording across water bodies regardless of depth.

Aside from being slightly faster and being able to transport two more passengers, the M113 itself remains largely unchanged from its Armed Assault counterpart in almost every way.

Drawbacks
As in Armed Assault, the ArmA 2 M113 is just as soft-skinned as its predecessor, rendering the M113 vulnerable to heavy calibre and light anti-tank weapons alike. The M113 is also no longer available with an anti-aircraft configuration, which means that it cannot serve in a SHORAD role as both of its predecessors were able to do.

The M113 always works best in convoys that have the heavier BMP-2 in them, as the latter can draw fire and suppress enemies with its 30 mm cannon while the former transports the bulk of the platoon's infantry.

Crew Capacity
The baseline M113 variant supports up to eleven passengers at a time (not including the driver and gunner). 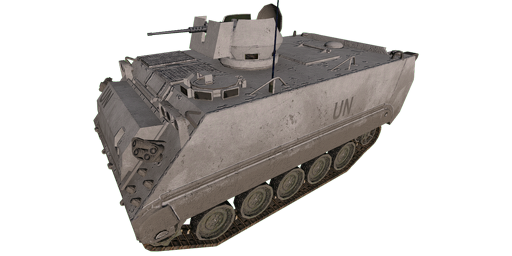 Has a crew of two for the gunner and a driver. It can transport up to eleven passengers. 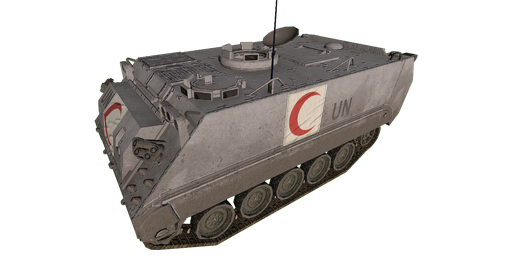 Medical support/transport variant. Its rear compartment has litters with enough space for up to three wounded soldiers (not including the driver).

Unlike the baseline variant, this model does not have a gunner and is completely unarmed. This model is also unable to store any weapons, ammunition, or equipment.

Both variants of the M113 have base armour values of 105.

Note that with the exception of the turret, component hitzones remain identical on M113 (Ambulance) variants.

The hulls on both variants can resist up to 105 points of damage.

Their engines can survive only 36.75 points of damage before failing. At least 20% of damage is always shared with the vehicle's main "health" pool.

A damaged engine will prevent M113s from being able to attain their top speed, and will gradually leak fuel over time depending on the severity of damage incurred.

Both tracks can withstand a maximum of 15.75 points of damage. At least 20% of damage onto either tread will be transferred to the M113's main "health" pool.

Disabling either track will make manoeuvring on any surface incredibly difficult. Destroying both will effectively result in a mobility kill.

The armed M113's cupola can withstand 105 points of damage. Disabling the turret will prevent it from being rotatable by the gunner but does not stop the HMG from being fired.

NOTE: Only available on the baseline M113 variant.