The M136 is an 84 mm rocket launcher featured in both ArmA: Armed Assault and ArmA 2. 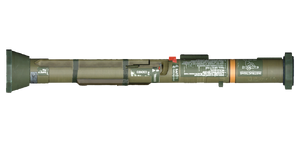 The M136 is used by both U.S. Army and RACS military forces in ArmA: Armed Assault.

The M136 is an unguided and reloadable, portable short-range rocket launcher.

It can load and fire 84 mm rockets fitted with high-explosive anti-tank (HEAT) warheads, and is accurate at ranges of up to 500 metres. The M136 lacks an optical sight and only features a simple ironsight to aim with.

The M136 is designed to be a lightweight, shoulder-carried anti-vehicle rocket launcher that is effective against both light and medium armoured vehicles.

If necessary, it can also be used to raze unreinforced structures and be employed against clumped-up infantry; though it is rather ineffective in the case of the latter due to the small blast radius of the HEAT warhead.

For all intents and purposes, it is essentially the American counterpart of the Russian-made RPG-7V. However, the M136 doesn't feature the ability to load more powerful munitions and is restricted to just one warhead type. It also isn't guided like the heavier Javelin Launcher, which makes it largely redundant for hitting anything beyond 500 metres.

The M136 only supports one type of rocket. It requires two inventory slots to carry:

The rocket is always fired with an initial velocity of 5 m/s and only needs 1 second after launch to reach a maximum speed of 200 m/s in mid-flight. The warhead has a blast radius of 2 metres. 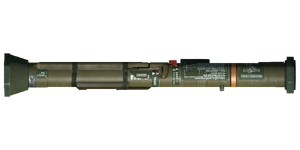 Returning from Armed Assault, the ArmA 2 M136 continues to serve as the standard-issue shoulder-fired rocket launcher of the U.S. military.

It still uses 84 mm rockets fitted with HEAT warheads, though it can now be used to engage enemy vehicles at distances of between 250 and up to 1,000 metres instead. The M136 lacks any kind of sensors for tracking targets however, and only has an ironsight to fall back onto for aiming. It cannot have its zeroing adjusted.

The ArmA 2 M136 is once again designed to complement medium AT launchers like the USMC's SMAW or the U.S. Army's MAAWS.

While it still retains its uses against non-heavily armoured vehicles, the M136 isn't nearly as helpful when it comes to tackling Main Battle Tanks compared to its Russian-made counterpart - especially when the latter is loaded with PG-7VR grenades.

Compared to its predecessor in Armed Assault, the M136's damage output has been sharply reduced and is also much less flexible due to the tiny blast radius of its warhead. As before, its HEAT warhead isn't powerful enough to penetrate heavy vehicle armour, although some damage can still be inflicted provided that it strikes the rear of the tank or turret where an MBT is most vulnerable.

This is still inadvisable to attempt and will almost always result in the M136's already limited supply of munitions being wasted, so it's better to leave such targets to dedicated ATGM launchers like the FGM-148 Javelin instead.

The M136 only supports one type of rocket. It requires six inventory slots to carry:

The rocket is launched with an initial velocity of 285 m/s and can reach a maximum speed of up to 290 m/s in mid-flight. The warhead has a blast radius of just 1.1 metres.