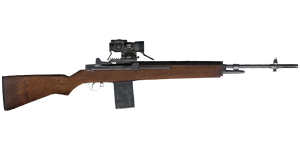 The M14 is a 7.62 mm marksman rifle used exclusively by U.S. Army special operations units in ArmA 2. It was added with the release of the Operation Arrowhead expansion pack.

The M14 is a selective-fire, gas operated battle rifle with a rotating bolt that is chambered to fire the 7.62×51 mm NATO round.

It loads from the same 20-round box magazines used by the DMR, and can attain a rate of fire of up to 600 rounds per minute with a muzzle velocity of 900 m/s. The M14 only comes in a single model fitted with the CCO red dot sight, and cannot be suppressed or be fitted with any side rail accessories.

Compared to its contemporaries like the FAL, the M14 is a decent general-purpose battle rifle that has less recoil and is much easier to control. Depending on their skill, an M14 user can land multiple successive shots on a target rapidly at distances of up to ~ 500 metres.

The M14's problems mostly stem from its lack of accessories as it does not feature a sub-variant fitted with magnified scopes, nor does it have a laser pointer for use in low-light conditions. As a result, its maximum effective range is restricted to just under 600 metres.

In the hands of a good shooter, however, it is still entirely possible to hit targets as far out as 700-800 metres, which is comparable to dedicated DMRs like the Mk17 Sniper.

The M14 can only load one specific type of magazine. It requires one inventory slot to carry:

Box mag with 7.62 mm NATO ball ammunition. Intended for use with the DMR marksman rifle, but is utilised as the M14's standard magazine. Can also be shared with the CZ 805 BREN's B1 battle rifle variant.

Does not have any visible tracers.

Two U.S. Army Delta Force marksmen shortly after landing. Note the operator in the background armed with the M14.

Ditto, but for the second operator from the left.