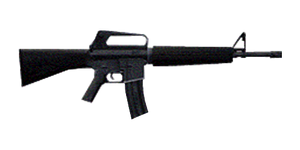 The M16A2 is a gas operated, selective fire assault rifle that is chambered to fire the 5.56×45 mm NATO round.

It loads from 30-round magazines and can attain a fire rate of up to 857 rounds per minute, with a muzzle velocity of 990 m/s. It has an effective range of up to 450 metres.

The M16A2 was the standard issue service weapon of the U.S. Armed Forces at the height of the Malden Islands Crisis. Along with its Soviet counterpart, it is one of the two staple weapons that can be used in Cold War Assault.

In terms of drawbacks, the M16A2's main weakness is its lack of a full auto mode as the M16A2 is restricted to toggling between semi-auto and 3-round burst fire.

This makes it comparatively less effective in close quarters since the AK-74's shooter will always be able to fire without interruption (even if they miss). In contrast, the M16A2's operator will be left vulnerable for a split second if they miss their initial burst. 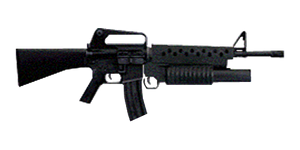 The M16A2 GL is a modified version of the baseline M16A2 rifle that has an underbarrel grenade launcher fitted onto it.

While identical in most aspects, the M16A2 GL's sole downside is that it cannot utilise its parent weapon's ability to fire rifle grenades from the muzzle; though it's not necessarily a downside given that it already has an underbarrel grenade launcher to begin with.

The M16A2's M203 grenade launcher can launch either high-explosive (HE) or flare rounds, and is accurate at distances of up 250 metres away.

For M203 grenade rounds and rifle grenades, refer to its dedicated article here.

Both variants of the M16A2 only support a single type of magazine. It requires one free inventory slot to carry: 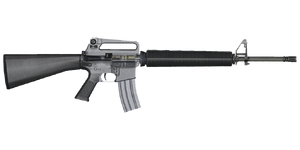 The M16A2 is used by both RACS military forces and Black Element PMCs in ArmA: Armed Assault.

The M16A2 returns from Cold War Assault and serves as a general-purpose 5.56 mm assault rifle.

It can now load from either 20-round box or 30-round STANAG magazines, has a muzzle velocity of 850 m/s, and can only attain fire rate of 600 RPM. The M16A2 is not available in any variant fitted with optical sights/muzzle attachments.

Armed Assault's M16A2 is the primary service rifle of the Royal Army Corps of Sahrani, and is similar role-wise to the Russian AK-74 wielded by their SLA counterparts. However, the M16A2's actual performance leaves much to be desired, and comparatively inferior when matched against its modernised counterpart and the G36 family.

Since it cannot be fitted with optical sights (both attached and integrated), this limits the M16A2 to a maximum effective range of just 400 metres. Beyond that distance, the M16A2's ironsights are too cumbersome to reliably hit targets with. 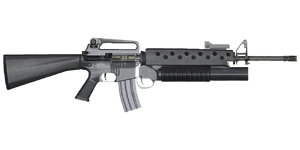 The M16A2 + M203 is a modified version of the baseline M16A2 rifle that has had an underbarrel grenade launcher fitted onto it.

The M16A2 + M203 is only wielded by RACS grenadier soldiers, and has no functional or performance differences from its parent weapon.

The M203 is capable of launching either conventional high-explosive (HE) grenades or illumination/signal flare shells. It has a leaf sight that is accurate at distances of up to 300 metres.

Both variants of the M16A2 support being loaded with three types of magazines. They all require one free inventory slot to carry: 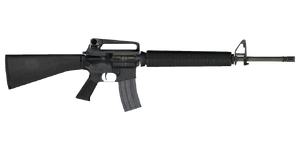 The M16A2 is used by both the Takistani Army and anti-government rebels in ArmA 2.

Once again returning in ArmA 2, the M16A2 is now used by several more factions but functionally remains the same as its predecessors.

It still loads from either 20-round box or 30-round STANAG magazines shared by its modern counterpart, and is able to attain a fire rate of up to 800 RPM on burst. The M16A2 does not come in any variant that has either optical accessories or muzzle attachments fitted to it.

Identical to its predecessor in Armed Assault, the M16A2 is often wielded as an alternate primary weapon alongside the heavier FAL battle rifle carried by most Takistani soldiers.

Compared to its Russian-made counterpart, the M16A2 has better ironsights with a slimmer aiming post which makes it easier to aim at targets at distances of up to 400 metres away. The M16A2's use of 5.56 mm also allows it to share ammunition with modern assault rifles like the M4 carbine, or even the SCAR family of modular weapons.

Its lack of modularity does mean that isn't nearly as useful compared to other modern rifles though, as is its inability to fire on full auto. Since it doesn't feature any variants fitted with suppressors, the M16A2 is also useless for missions that require stealth. 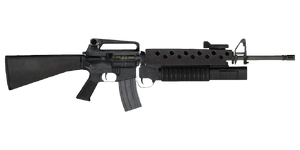 The M16A2 M203 is simply a modified version of the baseline M16A2 rifle that has an underbarrel grenade launcher attached to it.

It is wielded by some ION PMC contractors operating in Takistan, but is otherwise used only by the Takistani Army and anti-government rebels.

Like its parent, it is also chambered to fire the same 5.56 mm NATO round, but has an underbarrel grenade launcher that can fire 40 mm grenades. It is otherwise completely identical in terms of stats and handling.

The M203 has a conventional leaf sight that is accurate at ranges of up to 300 metres.

Both variants of the M16A2 support being loaded with six types of magazines. With the exception of 100-round drums, all others require only one inventory slot to carry (the drums occupy two slots): 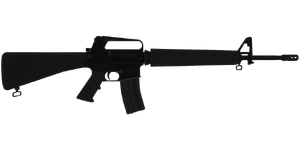 The M16A2 is used exclusively by U.S. military forces in ARMA Reforger.

Unlike its predecessor in ArmA 2, it can only load two types of 30-round STANAG magazines. Its muzzle velocity and fire rate remain unchanged at 930 m/s and 800 RPM (respectively).

The M16A2 is still unable to mount optical sights and cannot be suppressed with muzzle attachments. However, the carryhandle's sights do allow for manual zeroing. Starting at a minimum of 200 m it can be zeroed up to a maximum of 800 m, with adjustments being made in 100 m increments/decrements.

Additionally, the M16A2 can be fitted with the M203 underbarrel grenade launcher. It requires replacing the barrel's handguard with a dedicated heat shield and the M203 itself.

M16A2s are limited to loading two types of magazines. They are not interchangeable with other 5.56 mm-chambered weapons:

30-round STANAG magazine loaded with a mix of M855 ball and M856 tracer ammunition (with a 25/5 split). Only the last five rounds of the magazine comprise of visible tracers.

It shares the same weight, inventory slot layout, and volume space requirements with standard 30-round STANAGs.