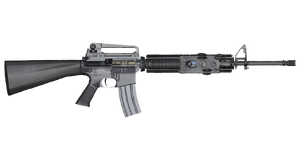 The M16A4 is used exclusively by the U.S. Army in ArmA: Armed Assault.

The M16A4 is a gas operated, selective-fire assault rifle that is chambered to fire the 5.56×45 mm NATO round.

It loads from 30-round STANAG magazines shared with the M4 carbine, and is able to attain a fire rate of up to ~ 666 rounds per minute, with a muzzle velocity of 850 m/s. By default, M16A4s feature only ironsights but can alternately be fitted with ACOG riflescopes. However, it is not possible to mount suppressor attachments onto the muzzle.

The service weapon of U.S. Marines deployed to Sahrani, the M16A4 is a fairly precise assault rifle. It is visually similar to the M16 but has several useful features added such as a removable carryhandle and an integrated rail mounting system.

With an effective firing range of up to roughly 400 metres, the M16A4 serves as a decent general-purpose rifle. When opting for the alternate riflescope-fitted M16A4 ACOG variants, the M16A4 can be accurately used to engage targets at distances of up to 600 metres away instead.

Handling-wise, the M16A4 isn't that much different to the M4 carbine as both have almost identical recoil. The main advantage (and disadvantage) of the M16A4 is its longer barrel, which provides it slightly increased range over its carbine counterpart but also makes it more cumbersome to wield in close quarters.

Though it can only be toggled to fire in either semi-automatic or 3-round burst modes like the M16A2, simply tapping the trigger as quickly as possible allows the operator to essentially fire on full auto as there is almost an unnoticeable delay between bursts. 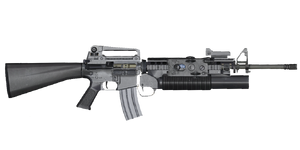 The M16A4 GL is a modified variant of the baseline M16A4 rifle that has an underbarrel 40 mm grenade launcher attached to it.

Along with its parent weapon, it is also chambered to fire the same 5.56 mm NATO round but the underbarrel M203 is designed to launch 40 mm grenades instead.

The M203 has a conventional leaf sight that is accurate at distances of up to 300 metres. It is otherwise virtually identical to the standard M16A4 in every other way.

For grenade rounds usable with the GL, refer to its dedicated article here.

Both variants of the M16A4 support being loaded with three types of magazines. They all require one free inventory slot to carry: 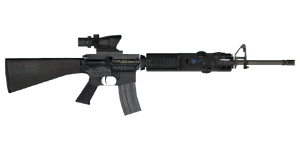 The M16A4 is used exclusively by the U.S. Marines in ArmA 2.

The M16A4 returns once more in ArmA 2, and now serves exclusively as the main weapon of USMC forces instead.

It still loads from 30-round STANAG magazines, but can also be fed with those used by other 5.56 mm weapons like its U.S. Army counterpart. It has a much higher rate of fire (800 RPM) and now has a muzzle velocity of 930 m/s instead.

The M16A4 features a wide variety of models fitted with optical sights ranging from CCO red dot sights and ACOG riflescopes, as well as laser pointer accessories. It does not come in any variant fitted with a muzzle suppressor.

The service rifle of U.S. Marines at the height of Operation Harvest Red, the M16A4 continues to serve as a rugged jack-of-all-trades assault rifle. Besides a few alterations to its base stats like a higher RPM and muzzle velocity, the M16A4 largely remains unchanged to its predecessor.

However, unlike its Armed Assault predecessor, the M16A4 now features additional optical sight varieties for the user to choose from thanks to its rail system.

Variants with non-magnified optics are generally effective against targets that are up to 400 metres away. On the other hand, riflescope-fitted models such as the M16A4 RCO can still be used to engage targets at distances of up to 600 metres away. 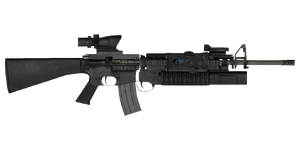 Like before, the M203 still uses a conventional leaf sight that is accurate at ranges of up to 300 metres. It features both ironsight and riflescope-fitted variants to select from.

There are otherwise no other differences to the basic M16A4 rifle.

Both variants of the M16A4 support being loaded with six types of magazines. With the exception of 100-round drums, all others require only one inventory slot to carry (the drums occupy two slots):