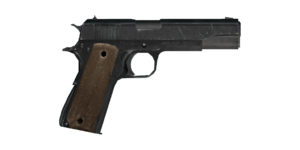 The M1911 is a semi-automatic handgun that is chambered to fire the .45 ACP round.

It loads from 7-round magazines, and can attain a fire rate of up to 600 rounds per minute with a muzzle velocity of 260 m/s. The M1911 is unable to mount any accessories or attachments.

The standard-issue sidearm of British personnel at the height of Operation Crimson Lance, the M1911 is a rugged pistol that provides both stopping power and accuracy in a compact package.

It is just as accurate as its 9 mm counterpart and can strike targets at distances of up to 50 metres away. Unlike the former, it has minimal damage drop-off thanks to its usage of the .45 ACP cartridge and is fairly effective at taking down armoured targets.

However, the M1911 is held back by its meagre magazine capacity compared to all other semi-automatic sidearms (aside from revolvers). This will result in the user being forced to constantly reload - not only leaving them vulnerable in the process, but also resulting in them exhausting their supply of magazines rather quickly after one or two firefights.

The M1911 only supports one magazine type. It occupies one inventory slot:

7-round magazine loaded with .45 ACP ammunition. Does not contain any tracers.

A British fireteam prepares to breach a hut. Note the two troopers in the centre armed with M1911 pistols.