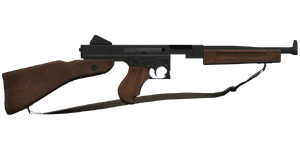 The M1A1 Tommy Gun is a .45 submachine gun used by both MACV-SOG and ROK military forces, as well as with the RLA in ArmA 3. It was added with the release of the S.O.G. Prairie Fire Creator DLC.

The M1A1 Tommy Gun is a selective-fire submachine gun chambered to fire the .45 ACP round. It uses a simple blowback operation and a fixed firing pin.

It can load either 20- or 30-round "stick" magazines. M1A1s have a muzzle velocity of 450 m/s, and are capable of attaining a fire rate of approximately ~ 750 rounds per minute.

The M1A1 cannot be fitted with optical sights or suppressors. It does not support being fitted with a bayonet. 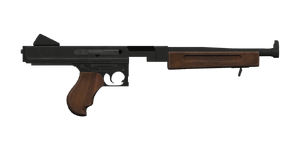 The Shorty variant is simply a modified M1A1 that has had its stock removed. Unlike the baseline M1A1, it is also wielded in limited numbers by CIA aircrews and with the Pathet Lao.

This modification results in the Shorty becoming slightly less stable when swung around in close quarters as it is significantly less wieldy compared to its parent weapon. However, in all other aspects it remains functionally unchanged from the baseline M1A1. 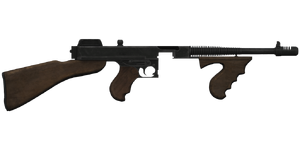 The M1928 is a modified variant that feeds from 50-round drum magazines as opposed to the M1A1's default 20-/30-round "sticks" (though it can still accept the latter). By default, it is not used by any of the factions.

Compared to the M1A1, the M1928 boasts a higher rate of fire that can reach up to ~ 857 RPM. Its inclusion of a forward grip also makes the weapon easier to control when firing on full auto.

Additionally, the M1928 features adjustable leaf sights that can be zeroed starting at a minimum of 50 metres. After 50 metres, this jumps to 100 metres, with subsequent adjustments being made with increments of 100 metres (up to a maximum of 500 metres). 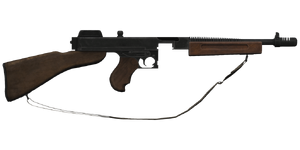 The M1928A1 is a modified derivative of the M1928 SMG. Unlike the M1928, it is exclusively used by the South Korean Army and Marines.

The two main differences it has over the baseline M1928 is the lack of a forward grip, and that the M1928A1 loads from 20-round "stick" magazines as opposed to the M1928's drums (though it can still accept the latter if needed).

However, it should be noted that in spite of the forward grip's removal, its recoil and accuracy are both identical to the M1928. For all intents and purposes, the M1928A1's modifications are purely cosmetic.

Baseline M1A1s are only able to feed from 20- or 30-rounder "stick" magazines. There is no such limitation imposed on M1928s and M1928A2s, which can freely load all types of magazines (both drum and "stick"):

Standard 20-round "stick"-shaped box magazine loaded with .45 ball ammunition. It has a weight of 7 "mass" units.

Only the last four rounds of the magazine consist of tracers.

Extended capacity 30-round magazine. It has a weight of 8 "mass" units.

Aside from its increased round count, it is functionally identical to standard 20-rounder boxes. Only the last four rounds of the magazine consist of tracers.

It has more than double the capacity of 20-rounder "sticks" and as such, weighs twice as much at 19 "mass".

Other than the inclusion of tracers, it remains unchanged compared to regular 50-rounder drums.