OUTDATED: The information in this article is currently out-of-date and needs to be updated with newer information based on changes from a recent patch. 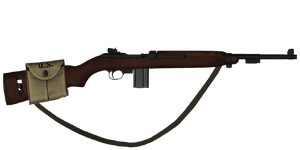 The M1 Carbine is a 7.62 mm carbine used by MACV-SOG forces and in limited numbers with the Viet Cong in ArmA 3. It was added with the release of the S.O.G. Prairie Fire Creator DLC.

This article is a stub. You can help Armed Assault Wiki by expanding it.

The M1 is a self-loading, semi-automatic carbine that is chambered to fire the 7.62×33 mm cartridge. It operates using a tappet-and-slide gas mechanism.

It primarily loads 15-round box magazines but is also able to accept newer 30-round magazines. The M1 Carbine has a muzzle velocity of 607 m/s and is able to attain a fire rate of up to 600 rounds per minute.

M1 Carbines cannot be fitted with muzzle suppressors, but they do accept dedicated telescopic sights designed specifically for use on the M1 that has a 2.2x zoom. Additionally, bayonets can also be attached onto the barrel (towards the front). 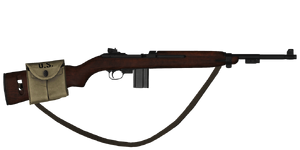 The Rifle Grenade variant has a muzzle adapter mounted by default, allowing the user to load and fire 22 mm rifle grenades.

The muzzle adapter features an adjustable sight that can be zeroed starting at 50 metres up to 200 metres (alternating in 50 metre increments).

It should be noted that due to the muzzle adapter it is not possible to mount bayonets onto the carbine, though the M1's dedicated telescopic sight can still be fitted. 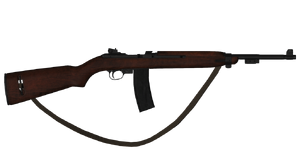 The M2 Carbine is a selective-fire variant of the M1 that allows the user to switch between a semi-automatic or fully-automatic fire mode.

On semi-auto, the M2 Carbine's ROF remains unchanged at 600 RPM. However, when set to full-auto instead the M2 Carbine will be able to reach up to ~ 740 RPM.

In addition, the M2 Carbine loads from 30-round curved magazines instead of the the older 15-round box magazine by default, though it can still accept the latter if 30-rounders are unavailable. In all other aspects, the M2 Carbine remains unchanged from the baseline M1. 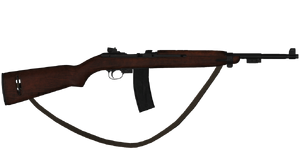 The M2 Carbine's Rifle Grenade variant is simply an M2 that has been equipped with a rifle grenade muzzle adapter.

It functions in exactly the same way as M1 Carbines fitted with rifle grenade adapters and cannot be fitted with bayonets.

The sole differences are that this variant is a selective-fire weapon as opposed to being semi-automatic only, and loads from 30-round magazines as opposed to 15-rounders by default.

In all other aspects, the Rifle Grenade variant remains statistically identical to its muzzle adapter-fitted M1 counterpart. 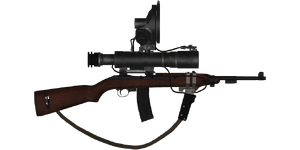 The M3 Carbine is a specialised variant of the M2 Carbine that is fitted with a first generation night vision scope/infrared searchlight.

Aside from the added weight of the NVS/IR optic, the weapon itself is statistically identical to M2 Carbines. The addition of the night vision scope allows the user to see clearly in nighttime/low-light conditions. The scope is also magnified and provides a fixed zoom of 3.53x.

Its night vision can be switched off for a regular day vision mode if the former is not required at the time of use. Manual zeroing is not possible on the M3 as its zeroing is always set to a fixed range of 100 metres.

Rifle grenade munitions can only be loaded onto M1s/M2s with their respective muzzle adapters fitted on. They can be of either the explosive, less-than-lethal (LTL), or non-lethal variety depending on the grenade's filling:

15-round box magazine used by default on M1s. It weighs 6 "mass" units.

Every fourth round fired will be a visible tracer round. Only the last four rounds comprise solely of tracers.

Larger capacity curved 30-round magazine. Weighs a "mass" of 12 units. It is primarily intended for use with M2s/M3s rather than M1s.

Aside from the increased round count, it is functionally unchanged compared to 15-round magazines.

Aside from every round in the magazine consisting entirely of visible tracer rounds, it remains unchanged from regular 30-rounders.

22 mm rifle grenade fitted with a fragmentation-based warhead. Weighs a "mass" of 8 units.

It utilises a timed fuse that will detonate 4.7 seconds after being launched. The warhead has a minimum fuse distance of 6 metres and a blast radius of 8 metres.

22 mm rifle grenade that uses a fragmentation warhead. It has a weight of 8 "mass" units.

Statistically, the M17 remains unchanged from the M1A2 and shares the same blast radius and minimum fuse range. The sole difference with the M17 is that it explodes upon impact as opposed to utilising a timer.

22 mm rifle grenade utilising a high-explosive anti-tank (HEAT) warhead. It has a weight of 8 "mass".

The M9's damage output is significantly greater than that of the M1A2/M17 but has a much smaller blast radius of only 2 metres. It uses an impact fuse as opposed to a timer and shares the same minimum fuse range of the former two warheads (6 metres).

22 mm rifle grenade with a white phosphorous (WP) filling and an impact-based fuse. It weighs a "mass" of 8 and retains a minimum fuse range of 6 metres.

The explosive component of the warhead can potentially inflict lethal damage if a direct hit is scored on the target. The rest of the warhead (its WP contents) will instantly ignite and burn any organic targets within the 8 metre blast radius.