The M21 is a 7.62 mm sniper rifle featured in ArmA: Cold War Assault and ARMA Reforger. 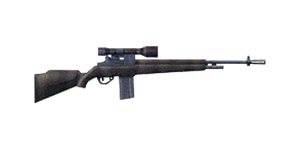 The M21 is a gas operated sniper rifle with a rotating bolt that is chambered to fire the 7.62×51 mm NATO round.

It loads from 20-round box magazines, and can attain a fire rate of up to 200 rounds per minute with a muzzle velocity of 853 m/s. The M21 is fitted with a riflescope that has a variable magnification power ranging from between 3x and up to 9x strength.

Wielded by the U.S. military's sniper teams at the height of the Malden Islands Crisis, the M21 is accurate at distances of up to 800 metres.

Compared to its Soviet counterpart, the M21 has a few advantages; namely the fact that its magazines have double the capacity, and that the M21 doesn't rely on a scope with a fixed zoom. This provides the M21's user with a clearer view of targets located beyond 600 metres.

Although the M21 has a slightly lower muzzle velocity of 853 m/s (compared to the SVD's 900), the difference is negligible at best and is equally capable of outright killing enemy infantry with just a single hit to the torso. Overall, all of these traits combined make the M21 a solid sniper rifle and arguably, the better choice out of the two weapons as well.

The M21 can only load one type of magazine. It requires one free inventory slot to carry: 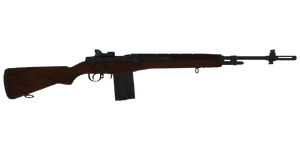 The M21 SWS is used exclusively by U.S. military forces in ARMA Reforger.

Reforger's M21 SWS serves as the primary weapon of U.S. sniper teams and is roughly analogous to the Soviet SVD.

Compared to its Cold War Assault predecessor, Reforger's M21 has a much greater fire rate of 700 RPM, though its muzzle velocity remains unchanged at 853 m/s.

The M21 cannot be fitted with a suppressor but it does support the mounting of an ART II riflescope. If the scope is not mounted, the user can opt to manually zero the M21 instead. Zeroing starts at a minimum of 100 m up to a maximum of 1,000 m. Adjustments are always made with increments/decrements of 100 m.

The M21 SWS is only capable of loading one type of magazine: