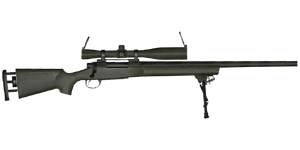 The M24 is used exclusively by U.S. Army snipers in ArmA: Armed Assault.

The M24 is a bolt-action sniper rifle that is chambered to fire the 7.62×51 mm NATO round.

It loads exclusively from 5-round box magazines, and has a maximum fire rate of just 30 rounds per minute with a muzzle velocity of 900 m/s. The M24 is always fitted with a folding (non-functional) bipod and uses a riflescope with a fixed magnification zoom of 10x. It does not come in any variant fitted with a muzzle suppressor.

As the U.S. Army's main sniper weapon, the M24 boasts both superior range and firepower to the 5.56 mm-chambered Mk12 SPR marksman rifle. Effective out to a distance of approximately ~ 800 metres, the M24 can potentially strike targets as far away as 1,000 metres depending on the user's skill. Accuracy-wise, the M24 is identical to the SLA's SVD Dragunov for engagements beyond 700 metres, though the difference is generally unnoticeable unless observed closely.

Its two main drawbacks are its low RPM due to being bolt-action as opposed to semi-automatic, as well as its meagre magazine capacity of only five rounds. Both prevent the M24 from being usable in close quarters as it simply fires too slowly and runs out of ammunition too quickly (unlike the Mk12 SPR).

The M24 only supports being fed with one type of magazine. It requires one free inventory slot to carry: 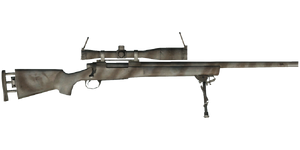 Returning from Armed Assault, the M24 continues to serve as the primary weapon of U.S. military snipers.

Statistics-wise, the M24 is unchanged from Armed Assault and has the same magazine capacity, muzzle velocity, and fire rate of its predecessor. It does however, have multiple camouflage finishes and also features a sub-variant designated as the M40A3.

Compared to the Mk17 Sniper, both weapons are chambered to fire the same 7.62 mm NATO round but the M24 is far more accurate against targets beyond 600 metres. It is more than capable of striking targets that are more than 800 metres away with relative precision (>1,000 metre shots are similarly possible but the shooter cannot rely on the scope's mil-dots).

For all its strengths however, the M24's bolt-action operation cripples its fire rate and limits its usefulness compared to semi-automatic marksman rifles like the DMR.

Because of its longer barrel length, it is also unwieldy to hold in close quarters compared to both the Mk17 Sniper as well as the DMR. This lack of versatility means that the M24 is rather useless outside of sniper engagements, and should not be brought onto missions where fighting at short distances is expected. 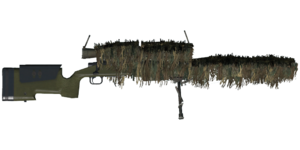 The M40A3 is a modified variant of the M24 sniper rifle that is only used by USMC snipers.

The M40A3's sole difference from the M24 is that it is always camouflaged with a ghillie wrap that covers both the barrel and the sniper scope. The stock is also slightly different and has a cheek weld pad.

Like the M24, the M40A3 is also based on the same rifle platform but has no functional or statistical changes from the M24 apart from the aesthetic changes, which are purely cosmetic in nature.

Both the M24 and M40A3 only support being loaded with one type of magazine. They require one slot apiece:

USMC M40A3. Note the ghillie wrap covering both the barrel and the weapon's scope.