The M240 is a 7.62 mm general-purpose machine gun featured in both ArmA: Armed Assault and ArmA 2. 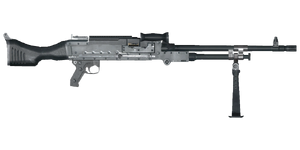 The M240 is used by both U.S. Army and RACS military forces in ArmA: Armed Assault.

The M240 is a gas operated medium machine gun with an open bolt design that is chambered to fire the 7.62×51 mm NATO round.

It feeds from 100-round belts stored in clothed boxes, and can attain a fire rate of up to 800 rounds per minute with a muzzle velocity of 900 m/s. It features a (non-functional) integrated bipod fixed below the barrel.

However, it compensates by firing the more powerful 7.62 mm NATO round which retains energy better at long range, especially against targets located beyond 600 metres.

Its main drawback stems from its weight/size, as carrying the M240 will prevent the user from being able to wield a secondary AT/AA launcher and its long barrel length makes it difficult to wield in close quarters.

The M240 is limited to feeding from one type of "magazine" only. It requires two free inventory slots to carry: 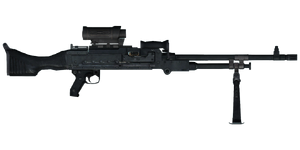 The M240 is used by both the U.S. Marines/U.S. Army forces, and in limited numbers with the Takistani Army in ArmA 2.

Returning from Armed Assault, the M240 once again serves as the mainstay GPMG of U.S. military forces and as an auxiliary weapon on certain Takistani aircraft.

It still loads from 100-round belts stored in cloth boxes and has an identical muzzle velocity, but now has a slightly higher fire rate of up to 846 RPM instead.

The M240 is additionally available with an alternate variant fitted with an M145 telescopic sight (designated as the M240 Scope) but does not support either muzzle attachments or side rail accessories.

As before, it is designed to provide suppressive fire at distances of between 800-1,200 metres. Thanks to its 7.62 mm NATO round, the M240 retains exceptional stopping power against infantry and lightly-armoured vehicles.

However just like the Mk 48 Mod 0 and the British Army's L7A2, wielding the M240 prevents the user from being able to carry a backpack. Likewise, the M240's long barrel and heavy weight makes it ungainly to wield in close quarters.

In addition, the M240's recoil is very difficult to control when it isn't fired from a prone position. However, if going prone is not an option then the shooter can still reduce its recoil by simply firing in short bursts of 2-4 rounds instead.

Lastly, it should also be noted that neither the ironsight or scoped variant of the M240 can be zeroed like the L7A2 by default. Shooting at its maximum range of 1,200 metres is solely dependent on the operator's skill and their current position.

The M240 is limited to feeding from one type of "magazine" only. It requires two free inventory slots to carry:

M240-armed variant of the HMMWV.

USMC M1A2 Abrams. Note the M240 mounted on a ring fixed to the loader's hatch on the left side of the tank's turret, complete with a gunshield.