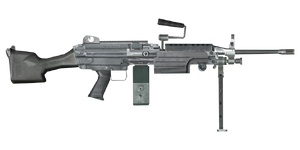 The M249 SAW is used by both U.S. Army forces and Black Element PMCs in ArmA: Armed Assault.

The M249 is a gas operated light machine gun with an open bolt design that is chambered to fire the 5.56×45 mm NATO round.

It feeds from 200-round belts stored in plastic boxes. The M249 can attain a fire rate of up to 857 rounds per minute, and has a muzzle velocity of 915 m/s. The M249 features a (non-functional) integrated bipod but is not fitted with any optical sights or sound suppressors.

The M249 essentially functions as a lightweight counterpart to the heavier 7.62 mm-chambered M240 GPMG.

Unlike the M240, the M249 has a reduced effective firing range and has twice the amount of dispersion at long ranges. It boasts a slightly higher RPM compared to the M240 however and thanks to its 200-round belt box, is more suitable for use against targets at distances of up to 600 metres.

Unfortunately, the velocity and damage output of the M249's 5.56 mm round falls off sharply against targets located beyond 600 metres. Out of the two platforms, the M240 still remains (arguably) the superior platform when it comes to providing reliable suppression.

The M249 is able to load from both its own 200-round plastic boxes or regular STANAG magazines. The former require two inventory slots to carry, while the latter only take up a single slot instead:

Standard 200-round linked belt stored inside a plastic box.

Rounds fired from this box specifically have a muzzle velocity of 915 m/s.

Basic 30-round rifle magazine used with the M4 carbine and M16A4 rifle.

Unlike 200-round boxes, rounds fired from 30-round STANAGs have a lower velocity of just 850 m/s instead. 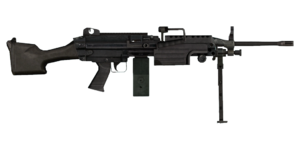 Returning in ArmA 2, the M249 SAW continues to serve as the standard-issue LMG of U.S. military forces.

It still loads from 200-round belts stored in plastic boxes, though it can now (optionally) load 100-round cloth bags as well. The ArmA 2 M249 retains the same fire rate and muzzle velocity of its predecessor and still features a (non-functional) integrated bipod. As before, it does not support being fitted with optical sights, side rail accessories or sound suppressors.

The M249 serves as the standard-issue light machine gun of U.S. Marines deployed to Chernarus. The M249 boasts the ability to load 200-round belt boxes, which is effectively double the amount of its counterparts (XM8/MG36) while retaining decent accuracy. Lastly should the need arise, it can feed from 30-round 5.56 mm rifle magazines used by other members of the user's squad.

Its only drawbacks are the lack of magnified optics and usage of 5.56 mm ammunition, which suffers from a significant damage drop-off the further the round travels. These two factors combined limits the M249's effective range to just under 800 metres as opposed to 7.62 mm medium machine guns like the M240. The latter can not only hit targets that are further out, but are better at retaining the energy of their rounds over long distances. 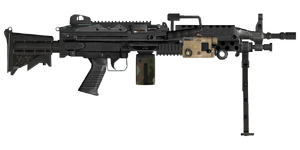 The M249 Para is a sub-variant of the baseline M249 SAW, but is used by both U.S. Army and Czech military forces instead. It was added with the release of the Operation Arrowhead expansion pack.

Unlike its parent weapon, the M249 Para has a few variants that are fitted with either the M145 telescopic sight or the TWS thermal scope.

All variants feature laser pointers for use in nighttime conditions. Though the M249 Para can load from the same 200-round plastic boxes as USMC M249s, it mainly feeds from 100-round cloth pouches.

Other than the inclusion of the new optics, the changes from the baseline M249 SAW are mostly cosmetic. The M249 Para simply has more rails fitted from which it can mount the sights and accessories.

There are nine kinds of "magazine" varieties that both M249 variants can feed from. However, only the M249 Para can be fed with all nine - unmodified M249s are not capable of loading 100-round "magazines".

The 200- and 100-round linked belts along with the 100-round drums take up two inventory slots apiece, while the individual rifle magazines only take up one slot:

Standard 200-round linked belt stored inside a plastic box. Rounds fired from this box have a muzzle velocity of 915 m/s.

The fourth round will always be a red tracer, while the last four rounds consist exclusively of tracers.

100-round linked belt stored inside a soft pack. Remains otherwise identical to regular 200-round plastic boxes.

Alternate 200-round belt box, specifically intended for use with the L110A1.

It remains statistically identical to regular 200-round belt boxes.

Basic 30-round rifle magazine. Rounds fired have a muzzle velocity of 930 m/s. 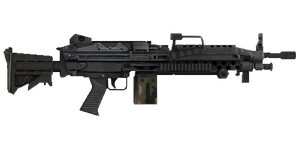 The M249 is used exclusively by the Operators in ArmA Tactics.

Compared to the M4A1, it possesses slightly more range and has significantly increased damage; in most cases, a single burst at close distances is sufficient to outright kill an enemy (even without landing a critical).

On the downside, the M249's magazine capacity is smaller and without the Extended Magazine upgrade, will most likely require wasting AP on reloading after a single firefight. Its hit probability drops off the further the target, which negates some of its range advantage though fortunately, it doesn't fall off as sharply compared to the M1014.

It should also be noted that since the M249 can't be suppressed, equipping it on missions which require or favour a stealthy approach is ill-advised. In such cases, it may be better to exchange the M249 for the M4A1 - at least temporarily until the following mission.

With regards to weapon selection, any member of the team can be equipped with the M249 provided you have enough credits to outfit them with it.

However, since you won't have much spare cash to throw around in your first playthrough, it is advisable to prioritise equipping Masters first as he is the only member of the team who starts off with a decent level in LMG usage. 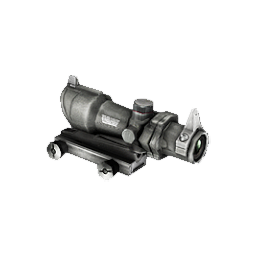 Increases the Operator's hit probability by +5%. Costs 250 credits to acquire. 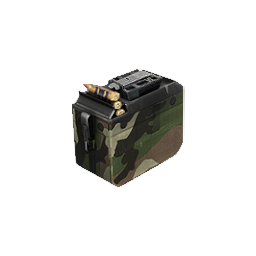 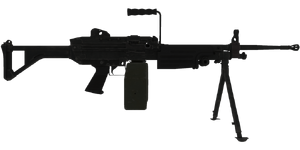 The M249 SAW is used exclusively by U.S. military forces in ARMA Reforger.

The M249 SAW returns in Reforger and still feeds from 200-round linked belts stored in an ammobox.

Unlike its predecessors, the fire rate of Reforger's M249 has been reduced to 800 RPM. However, its muzzle velocity is mostly unchanged and still remains at an approximate ~ 914.19 m/s.

It features a (non-functional) folding bipod but cannot be suppressed with muzzle attachments. Likewise, no optical sights can be mounted onto the M249. It can however, be manually zeroed starting from a minimum of 100 m up to a maximum of 1,300 m. Adjustments are made with increments/decrements of 100 m.

NOTE: Although the M249 SAW's linked belts utilise the same M855/M856 rounds as other 5.56 mm-chambered weapons, their performance will be slightly different due to the M249's lower muzzle velocity. All other aspects remain identical, however.

The M249 SAW is able to load two types of magazines:

Standard 200-round linked belt stored in an ammobox. The belt uses a mix of M855 ball and M856 tracer ammunition.

Every fifth round fired comprises of a visible tracer. Only the last six rounds of the belt will consist entirely of tracers.

Tracer magazine. The belt is loaded entirely with M856 tracers.

It weighs and takes up the same amount of inventory slots/volume as the standard mixed load 200-round ammobox.