The M2 Bradley is a family of tracked Infantry Fighting Vehicles featured in both ArmA: Cold War Assault and ArmA 2.

First designed in 1981, the M2A2 Bradley is a tracked Infantry Fighting Vehicle that is intended to be used for reconnaissance duties and transporting infantry squads, all while providing them protection against small arms fire.

Armament
It is armed with a 25 mm autocannon and has a coaxial 7.62 mm medium machine gun, as well as a TOW missile pod.

The standard loadout of the M2A2 gives it 300 rounds of high-explosive (HE) shells for the main gun while the coaxial MMG is fed from a single 500 round belt of 7.62 mm ammunition.

The TOW missile pod is pre-loaded with 2 ATGMs by default, and has a further 6 in reserve (for a total of 8 missiles).

Features
The direct U.S. counterpart to the Soviet BMP-1 and BMP-2, the M2A2 serves as the heavy IFV of U.S. forces in Cold War Assault.

Compared to the M113, the addition of its dedicated TOW missile pod grants not only a significant firepower boost, but also allows the crew to fight tanks like the T-72 without having to rely on friendly anti-tank support.

Paired with its explosive 25 mm munitions that are excellent against infantry and light armour, as well as its increased armour plating, the M2A2 has overall better survivability and is more flexible against multiple kinds of targets.

Drawbacks
The M2A2's main drawback is its lack of armour piercing munitions. As the 25 mm autocannon can only fire HE shells, it relies solely on its TOW missiles to destroy armoured enemy vehicles. This is in stark contrast to the BMP-2 which is capable of firing both AP shells and ATGMs.

On the other hand, when compared to the M113, it can only ferry up to six troops at a time which is two less transportable passengers in total. The M2A2 is not amphibious and isn't able to ford across any body of water. Mobility-wise, it takes longer to accelerate and has a significantly taller and bulkier turret profile, which makes it easier to spot from afar as opposed to the smaller M113.

Crew Capacity
The M2A2 has a seating capacity of three for a driver, the gunner and commander. It can transport up to six passengers in its rear compartment.

The M2A2 has 200 points worth of armour plating.

The gunner position controls all weapon systems mounted onto the turret, including both the primary Cannon 25 mm, TOW launcher and coaxial MG 7.62 mm:

Primary weapon. The Cannon 25 mm's HE rounds are only effective against infantry, unarmoured/lightly-armoured vehicles and low-flying helicopters.

The MG 7.62 mm is mounted adjacent to the main autocannon.

It can attain a fire rate of up to 600 RPM and has a muzzle velocity of 1,000 m/s. Accuracy-wise, it always has a fixed dispersion of 0.0007 rad regardless of distance.

It has a firing delay of 0.5 seconds in-between launches and requires 30 seconds to finish reloading a fresh batch of missiles.

TOW missiles have an initial launch velocity of 30 m/s and can reach speeds of up to 350 m/s in mid-flight. Their warheads are HEAT-based and have a blast radius of 2.5 metres.

The M2A3 Bradley and its sub-variants are used exclusively by U.S. Army forces in ArmA 2. They were added with the release of the Operation Arrowhead expansion pack.

The M2A3 Bradley is an improved version of the original M2 Bradley IFV that was first developed during the Cold War.

The M2A3 is the latest development and incorporates enhancements including enhancements intended to improve its lethality, mobility, and survivability.

Armament
Like its Cold War Assault counterpart, the M2A3 retains the same armament in the form of a 25 mm autocannon, coaxial 7.62 mm machine gun, and an ATGM pod.

The standard loadout of the M2A3 gives it a total of 420 rounds of armour-piercing discarding sabot (APDS) and 420 rounds of high-explosive (HE) shells for the main gun (it should be noted that both APDS and HE shells load from 210 round "magazines").

Lastly, the TOW pod has 2 ATGMs pre-loaded and has a further 8 more left in reserve.

Features
Unlike its Cold War Assault predecessor however, the M2A3 is fitted with the Bradley Urban Survival Kit (BUSK) module which protects it with additional Explosive Reactive Armour (ERA) blocks on the hull and turret.

This makes it further resistant to autocannon fire and AT munitions, along with Improvised Explosive Devices (IED). It is also better armed in comparison, and can tackle armoured vehicles much more efficiently since it can actually load AP shells and not just HE.

Drawbacks
The Bradley family's main downsides are their low speeds, slow acceleration, and overall poorer handling compared to both their Russian-made and wheeled USMC counterparts. Fortunately, their regular armament loadouts and high armour plating somewhat compensate for these drawbacks.

However, it should also be noted that the Linebacker variant is noticeably inferior to its Russian-made dedicated anti-aircraft counterpart in almost every way. Not only are its Stinger missiles less agile and shorter-ranged compared to the latter's AA missiles, but the Linebacker's 25 mm cannon lacks the range and fire rate of the 2S6M's twin autocannons.

Its only saving grace is that both the gunner and commander have access to night/thermal vision modes that can help negate visibility issues (problems that the 2S6M suffers from due to not possessing advanced optics), but this doesn't address its primary weakness of lacking adequate AA capabilities.

Crew Capacity
The M2A3 has a seating capacity of three personnel for a crew consisting of the driver, gunner and commander. It can transport up to six passengers in its rear compartment. 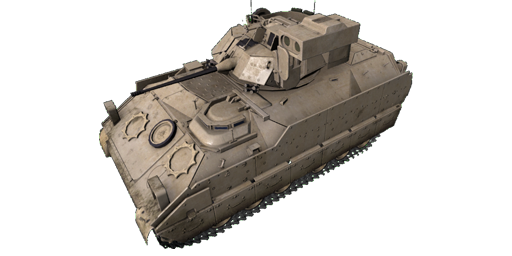 Has the same armament as the M2A3 but has less armour due to lacking additional ERA blocks. It can transport the same number of passengers in its rear compartment. 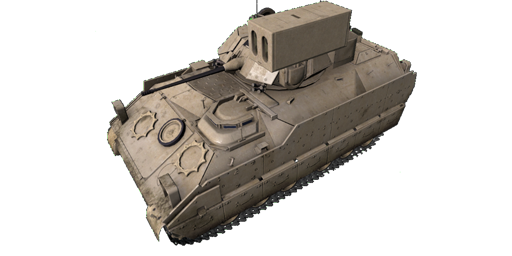 It has the same main gun as the M2A2 but lacks the ability to fire TOW ATGMs. The pod has been replaced to fire FIM-92 surface-to-air Stinger missiles instead (it has a total of four missiles loaded in its pod).

As with the M2A2, it lacks the M2A3's upgraded armour package but can still transport the same number of passengers.

Explosive Reactive Armour blocks on the baseline M2A3 variant are not functional in regular gameplay and do not provide any enhanced protection against anti-tank weapons or AP-based projectiles.

The engine on the M2A3 can incur up to 175 points of damage. For all other variants, they can only take 105 points before failing. Regardless of variant, 20% of damage is always transferred onto the vehicle's main "health" pool.

A damaged engine will severely degrade its power output and prevent the vehicle from being able to attain its top speed.

The M2A2/M6's tracks are able to take only 45 points of damage before breaking. The M2A3's on the other hand, are much more durable and can survive up to 75 damage.

Disabling either will impede (but not prevent) the Bradley's mobility. Destroying both will immobilise the vehicle on rough terrain and make it almost impossible to turn - even if the engine is still intact.

Both the M2A2/M6's turrets can incur 240 damage before failing. The M2A3's turret is significantly tougher and is able to withstand 400 points of damage instead.

No matter the variant, disabling the turret(s) will prevent the gunner from being able to rotate it. Mounted weapons can still be fired but cannot have their elevation/depression adjusted.

NOTE: For specifics on the M242's munitions, see its related section listed here.

The gunner position controls every weapon system on all three Bradley variants. They have access to two fields of view, and can toggle either day, night or black-hot/white-hot thermal vision modes.

An integrated laser rangefinder is provided for the gunner on all variants, though weapons must be manually zeroed and is only possible up to a maximum distance of 1000 m (in 100 m increments only):

The M242 can attain a fire rate of up to 200 RPM. It has an effective firing range of 1,500 metres. Switching munitions is not instantaneous, and requires 10 seconds to complete every time.

Dispersion is identical regardless of whether the M242 is firing HE or AP-based rounds, and is always fixed at 0.0003 rad. Rounds are fired in bursts of 5 unless the M242 is out of ammunition.

The M240 is mounted adjacent to the primary autocannon.

It can attain a fire rate of up to 800 RPM and requires 5 seconds to finish reloading a new belt. Accuracy-wise, it has a fixed dispersion of 0.0012 rad regardless of distance.

NOTE: Only available on the baseline M2A3 and unmodified M2A2 variants.

Anti-tank guided missile launcher pod. Can use either autonomous or manual wire guidance.

The BGM-71E TOW launcher only has a firing delay of 1 second in-between missile launches, but takes 30 seconds to reload another rack of missiles. The launcher has an effective firing range of 1,400 metres but its missiles have an absolute maximum firing range of 3,750 metres.

Missiles have an initial launch velocity of 55.16 m/s and can reach speeds of up to 329 m/s in mid-flight. They can be controlled up to a maximum distance of 3,750 metres. The warheads have a 2 metre blast radius.

NOTE: Only available on the M6 Linebacker variant.

It can fire missiles at a rate of one every 4 seconds (15 RPM) but takes 30 seconds to reload a fresh batch of Stingers. The launcher itself can only lock onto line-of-sight targets, but the seekers on its missiles are actually infrared-guided.

It always requires 3 seconds to complete lock-on for a valid target. The seekers have a 20% chance of losing lock due to countermeasure flares. The warhead has a blast radius of 8 metres.