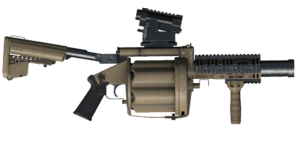 The M32 is a 40 mm grenade launcher used exclusively by U.S. Army forces in ArmA 2. It was added with the release of the Operation Arrowhead expansion pack.

The M32 is a revolver-type grenade launcher with a double-action operation. It is chambered to launch 40 mm grenade rounds.

It primarily loads from 6 round 40 mm grenade cylinders, but can also load regular single-grenade rounds used by rifle-mounted M203/Mk13 grenade launchers. It has a maximum fire rate of up to 120 rounds per minute, and has a built-in reflex sight that can be zeroed up to a maximum distance of 400 metres.

These grenades can range from lethal high-explosive (HE) grenades to non-lethal smoke shells, as well as less-than-lethal (LTL) flare rounds for signalling and illumination.

The M32 is ideal for providing indirect supporting fire from afar, as it has an effective range of between 175 and up to 300 metres (with a maximum of 400 metres). The reflex sight itself uses an orange-tinted quadrant reticle, which makes it easy for the operator to estimate the distance of a target.

With a large ammunition capacity and each cylinder only occupying two inventory slots (allowing for a total of six reloads), the M32's destructive potential far exceeds that of the M79 and the Mk13, as well as other underbarrel grenade launchers. Its only drawback is that the operator must give up use of another primary weapon (such as an assault rifle) in order to use the M32, which means they will require support from other members of the squad for close quarters situations.