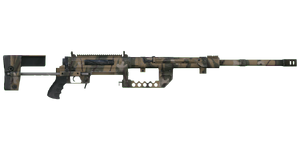 The M320 LRR is a bolt-action sniper rifle that is chambered to fire the .408 Cheetah round.

It loads from 7-round box magazines and can attain a fire rate of up to 50 rounds per minute, with a muzzle velocity of 910 m/s. The M320 has a single top rail that can only accept optical sights. It has an integrated bipod located just to the front of the barrel where the shroud is located.

In terms of performance, the M320 completely outmatches every other sniper rifle and machine gun when it comes to both range and precision.

When paired with long range optics such as the LRPS, it is entirely possible to engage targets at distances of up to 2,200 metres with pinpoint accuracy; a feat that can be matched by very few vehicle-mounted heavy weapons and even less handheld firearms (other than the SPMG).

Compared to the 12.7 mm round fired by its CSAT counterpart, the M320's .408 Cheetah has better ballistics that can travel faster and further, though at the cost of some power loss at shorter ranges. However, because the M320 uses a bolt-action operation, it is somewhat difficult to re-engage targets quickly and causes it to have an extremely low base rate of fire.

Box magazine loaded with .408 Cheetah rounds. Does not contain any visible tracers.