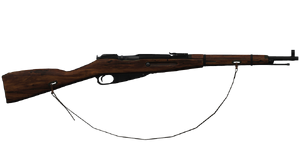 The M38 is a 7.62 mm bolt-action rifle used exclusively by the Viet Cong in ArmA 3. It was added with the release of the S.O.G. Prairie Fire Creator DLC.

The M38 is a bolt-action rifle that feeds from integral single stack magazines loaded via clip chargers. It is chambered to fire the 7.62×54 mm cartridge.

It loads exclusively from 5-round stripper clips, and has a fire rate of only ~ 27 rounds per minute with a muzzle velocity of 800 m/s. M38s are unable to mount optical scopes nor sound suppressors, but can be fitted with bayonet spikes which are attached to the barrel.

Its sights can be adjusted, and allow the user to modify its zeroing starting from a minimum of 100 metres up to a maximum of 1,000 metres (rising in 100 metre increments).

M38s are able to feed from two types of "magazines". The "magazines" share the same weight of 4 "mass" units, and are interchangeable with both the M1891 and M91/30:

Standard 5-round stripper clip. Four out of five rounds will be visible tracers.