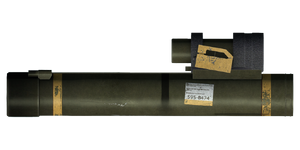 The M47 Dragon is a 140 mm anti-tank missile launcher used exclusively by Takistani anti-government rebels in ArmA 2. It was added with the release of the Operation Arrowhead expansion pack.

It is designed to load 140 mm missiles fitted with high-explosive anti-tank (HEAT) warheads, and is capable of hitting ground vehicles at distances of up to 1,500 metres. The launcher is fitted with an optical sight that has a magnification strength of 1.8x, and can toggle between either normal day or night vision modes.

Comparable to the American Javelin or the Russian 9K115 role-wise, the Dragon is a shoulder-launched ATGM system that is designed to take out Main Battle Tanks and other armoured vehicles alike from a safe distance.

In spite of this however, it is nonetheless an extremely weak weapon for an ATGM launcher. While heavy damage is guaranteed for older Soviet-era tanks such as the T-72 or T-55, the same cannot be said for the latest Russian-made tanks like the T-90 or the American M1A2 TUSK. Both will easily shrug off the Dragon's HEAT warhead unless the missile strikes a vulnerable component like the engine or tracks.

Given that its missiles weigh the same as the Javelin's (6 slots per missile) but inflicts reduced damage and has a much shorter operating range, the Dragon is quite redundant in the face of modern ATGM systems. Unless absolutely necessary, the Dragon should be avoided in favour of better launchers.

The Dragon only supports a single missile type. It requires six inventory slots to carry:

The missile is soft-launched and takes at least 0.15 seconds for its motor to ignite. The motor will continue gaining thrust over 1.45 seconds (with an initial velocity of 20 m/s) before reaching a maximum speed of 200 m/s. The warhead has a meagre blast radius of just 1 metre.